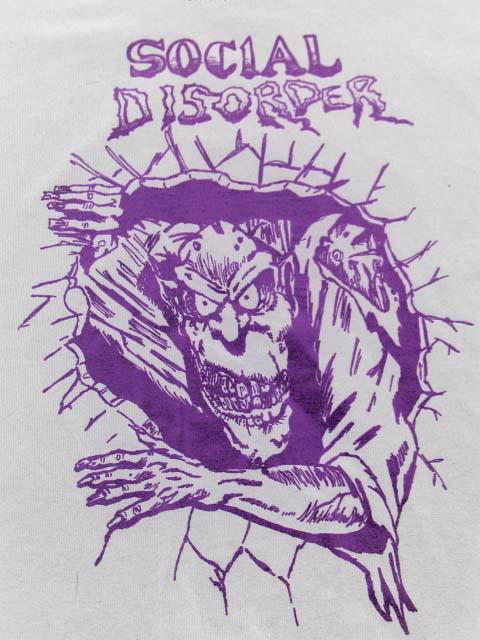 So we now had stickers made up for our band, and we were utilizing them via gorilla marketing, sticking them to anything and everything that we passed in our journeys. This seemed like the cheapest and most practical way to get our name out there without having to pay for proper advertising. However we still had one problem at hand, no mascot.

Shortly after the sticker fiasco, I was hanging out with Sanjai in our friendly neighbourhood comic shop. Sanj and I had a tendency to check out all the new, unknown, independent underground comics with the hopes of discovering some slept on gem. It was in this section of comics that our mascot was finally discovered.

Sanjai held up some comic and blurted out "This guys definitely got a social disorder!" I looked up to see him holding some no name rag of a comic, on the cover, a gnarly looking mutation of a man climbing his way through a hole in the wall that was no doubt made by him. As soon as the characters eyes locked with mine I said "Yup! That's the guy were looking for!" I happened to have no money on me at the time so I decided I would have to acquire this comic via the five finger discount, which I did swiftly and stealthily without being detected by the comic shop owners.

After school I headed home hastily and went right to my 2nd bedroom, the room I did all of my creative activities in. I broke out a blank, white piece of foolscap paper and began drawing the image from the comic book cover in freehand, just in black ink. Once I had the drawing completed I couldn't of been happier with the final result. From there I carefully drew in our band logo above the picture, and I was done!
I was also totally stoked with the final product. The next day I brought it to school to show the guys, as well as make some photocopies of it in the school library.

We never did come up with a name for our new mascot, he was simply known as "The Social Disorder Guy" but the fact of the matter was, we finally had a mascot...
Posted by Kabal at 12:58