The Trendy Faggot From Bramalea

If you've even been half heartedly following this story since the beginning then you should be familiar with the name John McCuish, the Scottish AC/DC fanatic who grew up on my street with me. The same guy who even though he was older than me, treated me as an equal growing up despite a bit of teasing and taunting on occasion. The same guy who became the drummer of E.B.S. and turned me onto them in the first place. The same guy who approached me one day in high school, handed me a cassette and said "Here you go Theo, check out our demo" and believe you me I did exactly just that the moment I walked in the house after school. For some reason I didn't have my Walkman with me that day so I had no other choice but to wait until I arrived home for the debut listen, one that left an everlasting impression on me to say the least.

The first song on the tape kind of threw me off as it was a cover version of "La Bamba" a far cry from thrash or hardcore, but in seconds I was laughing as they had replaced the lyrics with ones from a taco commercial. The rest of the tape was solid and thoroughly enjoyable. The two stand out songs for me were "Soap" and "The Trendy Faggot From Bramalea" a little ditty about a guy named Ronnie who was the former drummer of EBS. According to the song he had turned his back on his friends and band mates for a girl, Jen.

Always being one that had to know the inside scoop on every song by every band, I approached John the next day to see what kind of information I could acquire on Ronnie. John was pretty vague and didn't really give me the answers I was looking for except one, where to find him. John told me Ronnie worked at "Discus" a record store in my 2nd home, the Bramalea City Centre. Naturally I made my way there that evening and went browsing in Discus. Sure enough there was Ronnie in all his glory, sitting behind the counter flipping through pages of some magazine. I struck up some small talk with him, playing dumb like I had no clue who he was. Eventually we got on the topic of EBS and Ronnie mentioned he used to drum for them. I went off about how great of a band they are and asked why he would leave such a kick ass band. Ronnie gave me some reason that escapes me now but I believe it was a tall tale as he made no mention of Jen. All in all Ronnie was a really nice guy and easy to talk to, even if he had sold out his friends for a piece of tail.

I continued to visit Ronnie every time I was at the mall and we would talk rock. Ron also gave me carte blanche to take anything I wanted without paying for it, granted he didn't actually witness it. The next thing you knew I was showing up there with all my DJ'S buddies and we were stealing epic amounts of vinyl on a daily basis. Ronnie may have been dubbed "The Trendy Faggot From Bramalea" but in my books he was aces! 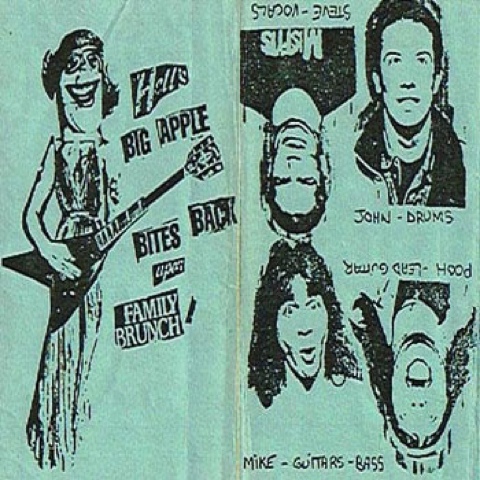