His Name Was Michael Myre

Michael Myre is another name you may have noticed reoccurring over the course of my tale, and no I am not referring to the silent slasher in John Carpenter's movie "Halloween" Some readers may recall me mentioning his sister Dorothea whom I met in grade 6. All through middle school she was always telling me how I reminded her of her brother. I finally met Mike once I was attending high school and it was cool to finally put a face to the name I had been hearing for the last 3 years. It all made sense why I reminded her of her brother, we were both fairly tall, dark hair, dark eyes, metal in our blood, and we shared a common bond, we both had one parent who was of Greek decent, for me it was my father, for Mike it was his mother. Truth be told we could have easily been mistaken for brothers, even up to this present day.

I met Mike through the older thrashers in my school, mainly John, as they were band mates. Mike was a really nice guy and was also quite funny. He had a knack for spinning yarn and telling tall tales so straight faced that you wouldn't even slightly sense his undertones of sarcasm and blatant lying, it was almost like a game for him waiting to see how long it took you to catch onto the fact he was blowing smoke up your ass. Mike was also a highly intelligent person and to this day he still remains as one of the smartest people I know. I can remember him teaching me about forensic science back in the 80s when it was breaking through as well as a lot of other interesting things, most of which were science related. Years later during my graduating year we actually were in co-op together. I couldn't figure out why he was still in High school years after he should have graduated. Turns out Mike decided to acquire every possible credit he could with the ambitions of having multiple career choices later in life, but unsurprisingly Mike landed in the field if Science.

Mike was also one of the first guys I ever knew who had a tattoo, the Corrosion of Conformity skull, and it adorned his right bicep with honour. This of course only made him 10 times cooler in my eyes, not to mention on top of all that he was one hell of a guitar player who is without a doubt one of the most musically talented people that I've ever met in my life. Mike was also a generally nice guy, never judging a younger kid like myself, and he always took the time to stop and chat and he was always cracking jokes, usually at the expense of others. Mind you he also used to tell the corniest jokes too that would have you groaning while he laughed hysterically.

Mike ended up landing a job at Bramalea city centre in the Sears store where I used to shoplift frequently, so I started visiting him a lot while putting in my hours as a mall rat. Turned out the OTHER guitarist from E.B.S. worked there as well. His name was... 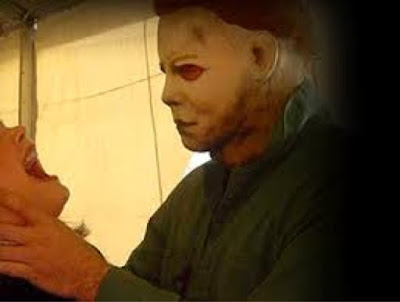