Apologies for no blog post this past Friday, I was a bit distraught over the shooting incident that took place in Connecticut, and the only thing on my mind was getting my son for the weekend and holding him tightly in my arms. My thoughts go out to the victims and their families, its terrible having to deal with such an immense tragedy this close to Christmas.
Now, on with the story.

I spent a portion of the summer of 88' acquiring patches to make my former heavy metal jean jacket transform into a thrashing jean jacket. Over the summer I managed to get some pretty cool patches. I found a nice Corrosion of Conformity patch with the image of the original Eye for an eye album cover, it was perfect to put on the shoulder of the jacket. I also picked up a small Misfits skull patch that went on the opposite shoulder. I ended up finding a small Stormtroopers of Death patch that I put on the left side of the chest. Buttons helped the decorating process as well and I had some cool ones, Anthrax, Beastie Boys, Public Enemy & D.R.I.

The coup de gras was a sweet back patch I found at a small rock shop in Malton in some tiny mall dubbed Westwood. It was solid black with Anthrax across the top in white and a huge image of the not man's face smack dab in the middle. Under his face, the word "NOT!" The jean jacket was in pretty kick ass shape now but I figured I'd continue working on it as I found more items over time. I think I only got to wear it for the first week of school until my girlfriend Lydia decided she wanted to wear it. It was common for cheerleaders to wear their boyfriends football jackets, but in the hardcore world our metal queens wore our jean jackets or our leather jackets.

As sad as I was to see my jacket go I was at least filled with a sense of pride and joy knowing that the woman of my life was proudly parading around in my colours. Since the jean jacket was now in her possession it was time to get to work on my leather jacket... 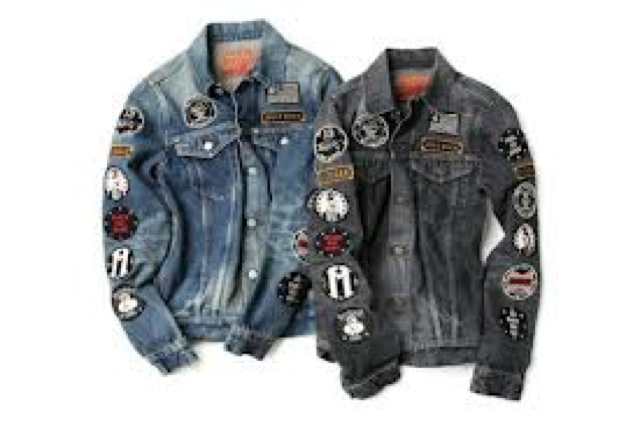