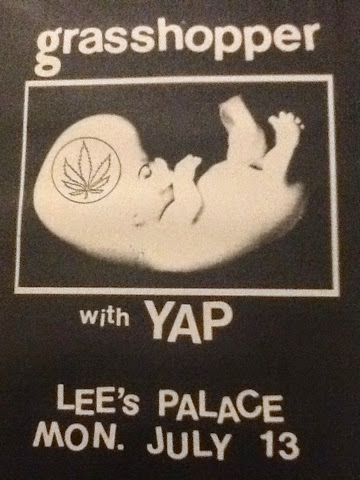 The morning of the gig I was in Brampton. For one reason or another I decided to check the mail, which was odd as I never got any mail, except for my Columbia house orders. I collected a handful of envelopes and went back in the house. I noticed one in particular that was quite odd. It was addressed to my house but the family name was Asian. There was no return address on the envelope, and judging by the unique postage it was safe to say it had traveled a long way.

When I opened the envelope I was in suspense.... A white lined piece of paper folded three times with nothing written on it. I unfolded the paper and my jaw nearly hit the ground when I saw four U.S. one hundred dollar bills and two U.S. fifty dollar bills! $500 U.S. in a time when their dollar was much greater than ours meant I had found even more money. I assumed this cash was wired to someone but it ended up in my mailbox. My only theory was the sender got the address wrong, as there was a few different Asian families on my street at the time. Being 19, naive and greedy, I decided to keep the money and deal with the repercussions should they happen to arise at a later time.

Derek picked me up before noon and we were on our way to the city. The first thing I did was I went to a new tattoo shop that had just opened on Queen street. It was called "Way Cool" and the owner Crazy Ace, had no qualms about taking me as his first customer of the day. I added on to my one tattoo that I had, and was out the door 30 minutes and $60 later. I spent the rest of the day on my own personal shopping spree of the city. The HMV superstore had just opened at 333 Yonge street, so I popped in there and spent quite a bit of money on records, CDs, and some video cassettes, mainly Gwar's latest film "Phallus in Wonderland"

By the time sundown started approaching, we were at Lee's Palace meeting up with Y.A.P. We got all of our gear unpacked and set up as we ironed out the details of the evening to come. I decided to treat some folks to pizza and ice cream with my new found wealth. I also ended up buying quite a few drinks for folks too. The turn out ended up being amazing, as both bands drew fairly decent sized amounts of people. One of the Y.A.P. entourage, a fellow named Bryce, had shown up with some photos he had taken of us performing in Oshawa. We were quite stoked to have our own professionally photographed images and we couldn't thank him enough. Bryce took more photos of us that night, and one in particular that would end up being the cover of our new recording.

As far as the show goes, I honestly don't have much memory of the actual performances. I suppose that's what happens when you run a bar tab on someone else's dime. I do recall an overall awesomeness in the air that night and a lot of positive vibes were shared by all in attendance. After the gig I ended up going back to Oshawa to party with the Y.A.P. crew, and I spent the night with a very hospitable young lady. Since she had a VCR I got to watch my new GWAR movie too, which was ridiculously over the top....and I loved it!  I ended up eventually taking the train back to Union station, then grabbed the GO back to Brampton. By the time I got home in the early afternoon I was a write off. Tired, sore, hungover, and running on barely any sleep, and to boot my pockets were pretty much empty. The cash had come and gone in the span of 24 hours. All I had on my mind now was lying down and flaking out while listening to the new music I bought, and that's exactly what I did.

Having been in my fair share of trouble prior to this day, I had a feeling in my gut that this was going to come back to haunt me at some point. I'd learned in the past that when the storm seems like it's clear that's when lighting strikes you in the ass. Days passed... Days turned to weeks, weeks to months, and months to years, yet nobody ever came looking for that envelope of money. Eventually I realized I was in the clear and it was apparent nobody was ever going to come looking for the money. I never shared this information with many people back then in fear of getting busted, but I knew in my mind that one day I'd be telling someone about "The day I found five hundred dollars"

Thanks for being that someone...
Posted by Kabal at 07:31