Mike C agreed to help us out and fill the bass player position for Grasshopper at the zero hour before our next gig. We would be playing with Goat Dance and MudFish, 2 bands from the Pickering area we had met at our first gig. Mike learned the songs in no time and we put on a pretty damn good show, better than our first performance. Mike was intended to be a hired gun, but he ended up staying with us and now Grasshopper was set in stone. We had the itch to play more gigs, but we were still getting turned down by promoters. Derek caught wind of an event called "Elvis Mondays" at a club called 1150 (named after it's address 1150 queen street west) Elvis Monday was a free event that gave up and coming bands a chance to showcase their talents. It was ran by a fellow named William New, a tall lanky white guy with dreads. Rumour had it he was an ex heroine junkie. We set up a meeting with Will and went by the club to meet him. He seemed to enjoy our demo and he was more than happy to give us a spot on the next Elvis Monday.

The following Monday we played and won the crowd over. Prior to the show Derek had made some stickers up for us using iconic images such as Sesame Street characters and comic book heroes like Spider-Man. We spent an hour or so before the show cutting out the stickers we had printed at Kinkos. The crowd seemed to love our free merch, and everybody wanted to get their hands on some stickers. By springtime we had played many Elvis Mondays and people were now half heartedly joking about how we had became the house band for the 1150. 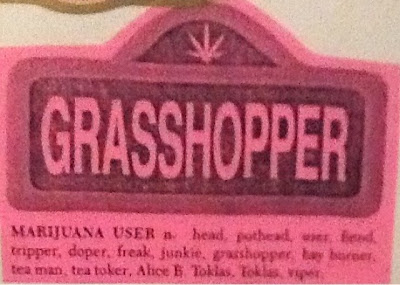 Everywhere I went in the city now it was common to see Grasshopper stickers. Our name was growing and spreading as was our reputation. Derek and his girlfriend had closed their store down due to financial issues, so now Derek and I spent our days on the corner as vendors, trying to sell off the leftover stock from the shop. You could find us in front of the Black Bull on any given day, peddling our wares with no permit to do such. The streetcar stop at that corner was now littered with Grasshopper stickers. People knew this as our "turf" and everyday we'd meet interesting people, spot the odd celebrity, and catch up with any friends who happened to pass by.

One day the Goat Dance boys were in the city and they asked us if we'd be into playing a gig up in Pickering with them, to which we eagerly agreed. We figured some out of town exposure couldn't hurt. The day of the gig arrived and we packed up the van and headed east. We were a bit taken back when we arrived at the venue to discover it was a community rec centre. We were to play in a gymnasium, which seemed odd to us. The place ended up being packed with kids, and we got great reception. The highlight of the day for us however was one of the acts we played with. They were called Y.A.P. (Yet Another Posse) a white suburban rap group with two MCs, a guitar player, and a DJ. It was really cool to see some other white boys rapping and doing their thing, much like Three And Pass was trying to do.

We chatted the guys up after the show and gave them our respects. We liked their band, they liked our band, so naturally we all clicked really well. We spoke of doing more shows together in the future, until a young lady approached us asking if she could interview us for her fanzine. Our first interview! I was starting to get a taste of what the rockstar lifestyle was all about. After the interview we were approached by the fellow who was the sound man for the gig. He was a tough looking guy with long hair and he was decked out in black. The guy introduced himself as Marc, but people called him "Dummy" Dummy showed great interest in us. He told us of how he recorded the Y.A.P. demo tape, then went onto express how he would like to work with us in the studio. We exchanged numbers and called it a day.

The next week the Y.A.P. boys invited us up to their neck of the woods to party, so we graciously accepted. We painted the town, then retreated to a house party, where we continued on with the pot and booze while listening to a new rap album that had just been released by a new group called Cypress Hill. I instantly fell in love with them. We headed back home in the wee hours of the morning and retreated to bed. A few days passed and we received a phone call from Dummy. He had secured us some studio time in the city with a producer named Pete Hudson, who was somewhat of a high figure in the production world.

We were all quite excited to be heading into a real recording studio for the first time... 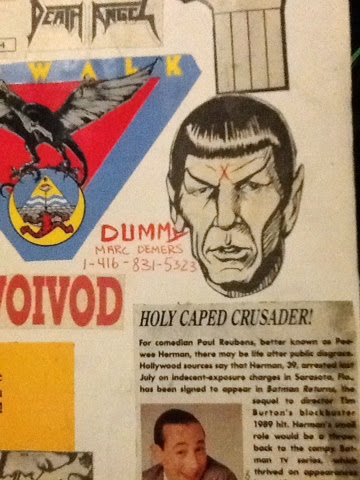