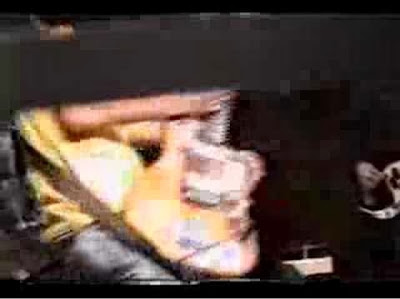 As Derek and I had our first jam at the new rehearsal spot, things felt good, but we needed to make a new song! It didn't take me long to realize that as
much as Derek enjoyed music, he didn't know shit about song writing! I asked him to play me some riffs that he had, and he obliged, squealing out some noisy, blistering riffs. After giving me a handful of riffs, I told him which two I liked the best, which were coincidentally the two riffs I felt would work best together for a verse/chorus idea.

We hopped on the instruments and jammed those two riffs for 8 bars each back and forth for what felt like forever. Once I had figured my beats out, we were playing quite tight, and things were sounding good. The song now needed a bit more structure. As it stood we would come in with the chorus as an intro, from there we would use the verse/chorus recipe twice. Now we stood at a point in the song where we needed a solo.

Derek was a piss poor guitarist, but the guy had heart, ambition, and the drive to succeed. He was also into a new type of underground music called "Grunge" that the world hadn't heard of yet, and this genre had moulded his mind to believe guitar solos were passé, or a thing of the past, and Derek was absolutely against them. Especially the seriously intricate wanky guitar solos often associated with heavy music. Being raised on metal, this was a hard pill for me to swallow, so we opted to have a "noise part" instead of a solo, which consisted of D thrashing himself about the floor like a child throwing a temper tantrum, his guitar screaming with intense noise and feedback like a cat being burned alive.

I wasn't quite sure how to bring the chaotic-ness of the noise part back into the third and final verse, so I borrowed a bit of help from Slayer's song "Raining Blood" in particular the breakdown hits towards the end of the composition. These hits gave us a good buildup to flow back into our third verse/chorus combo. Now all we needed was an ending, so once again I borrowed from another band, Corrosion of Conformity, who in my opinion were the masters of the "breakdown" If you are unfamiliar with what a breakdown is, please visit google or Wikipedia, although I think it's fairly self explanatory.

So for our breakdown on this particular song, we took the chorus and played it in half time, meaning it was half the speed we played it during the song. This created a nice, slow, heavy groove for us to bring the song to a close. We played the breakdown for four bars, each one slightly slower than the previous, the final one almost at a crawling tempo. We ended up adding an intro that was inspired from the beginning of the song "High Plains Drifter" by the Beastie Boys, and we also used a smidgen of it after the breakdown to have the song end abruptly. Our song was done and I had virtually composed the entire thing with the exception of the riffs Derek brought to the table. From here we needed some lyrics, so we started going through Derek's "poetry" writings, and again we cut and pasted some choice stuff together in a collaboration that resulted in us having lyrics for our song.

We decided to call the song "Heshien" in ode to one of D's friends who lived out in Los Angeles, his name was Gerrard, and  heshien was the word him and his friends used to describe a long haired stoner. Perfect we thought. So we now officially had two songs "Rugburn" and "Heshien" we also had a band name now that Derek had come up with which was "Slow Poke" although that would later change. I could only wonder what was to come next...