It felt like it wasn't very long after the "one night only Wiggaz show" when my telephone rang one day and I was surprised to hear Gerg on the other end. Despite my former grudge I was holding it was a pleasant conversation and I can remember being happy to hear from him. Our circle of friends was somewhat divided the last year, and deep down I wanted nothing more than for all of us to be one big happy family again.

Greg and I caught up on the phone for awhile then he brought up a new musical project he was working on with former Wiggaz drummer Frank, and a fellow named Carlo who was the bass player for the band Fraktured. The trio dubbed themselves "GRIFT" (after the movie "The Grifters") & cooked up a batch of fresh songs that they were looking for various people to sing on. I told him I was definitely interested, and not long after I was in possession of a cassette recording of a few of the songs he thought I might like to work with.

I can still vividly remember listening through the handful of songs a few times and decided on two of which I thought I could do something with. I put the word in to Gerg and it was decided. I can also vividly remember having a puff, then excitingly sitting down on the couch in my apartment on a nice sunny day with pen and paper ready to write some lyrics.

I honestly can't remember the window of time from when I finished writing until I was in a car with Greg on my way back to Rumblefish studios, our old Wiggaz rehearsal space. The owner Dave Caravaggio had since built a recording studio in what was once his oversized office and it was legit! Although I had been playing in bands on and off for 10 years at this point, today was actually my second time ever in a professional facility, the first being the Grasshopper demo 4-5 years prior.

From what I recall we were in and out of there like the wind, myself killing everything in one takes for the most part, and there was an overall buzz of excitement in the air amongst all parties involved. It was nice seeing Dave again, hanging out with Greg again, and re-uniting with Frank who I hadn't seen in some time. I'm pretty sure Carlo was there as well although we weren't close friends by any means at that point in life.

I was feeling great about how things went and I couldn't wait to hear the final product. I was extra excited to learn that Gerg and the boys were putting this out on CD which was mind blowing to me at the time as it would be my first musical endeavor that was to be captured on compact disc. Recording was said and done then it was back to regular life.

Eventually our lease was up and myself, Jay & Julie decided to part our separate ways despite still being great friends. I can't remember if I ended up back at my parent's house again or not for a brief window of time, but I did eventually end up living with Jenny and her family. Her oldest sister had gotten married and flew the coop, so her folks decided to sell their house and get an apartment on Lisa street, which was literally a 1 or 2 minute walk from Silver Maple where I had just moved out of.

I wasn't working with Jay at Beak Industries in Woodbridge anymore by this point, but I was still working at HMV in the Eaton's Centre, so it was nice still living across the street from the Bramalea City Centre where I caught my bus to Toronto for work.

At some point during this year my dream came true and our circle of friends were once again re-united and in full force. All my former room mates from "The Slayer House" were back in the picture, and it was great hanging out with Mike C. again as well as rekindling my friendship with Shayne, whom I considered my best friend. Him and Jay were talking, and after time we were all "one big happy family" yet again!

I also did eventually end up back in my Mom & Dad's basement and my mom was now dropping me off to get my Go bus to Toronto in the mornings. When I moved into the Lisa apartment with Jenny and her family, her parents allowed my faithful cat Fritz to come along for the ride even though they weren't thrilled about the idea. When I moved back home they asked me if they could keep Fritz as they had grown so fond of him, I instantly said "YES" as it was the least I could do considering how hospitable they had been to me over the last 2 years.

After some anticipation, the day finally came and I had the Grift CD in my possession. As per usual I instantly headed to the stereo, threw on the headphones & listened through from front to back as I followed along with the lyrics. It was really cool hearing some familiar old voices again including Pat from Fence, Jim from Fraktured, Scott from Viciousphere, Fudd from Dirge, Kenny from Perfectly Normal, and my old BBJ brother Mike Myers. It was also very interesting to hear what had been done with the songs Gerg gave me on the tape way back when.

I can remember being so proud to show my parents I was on a real CD, as they somewhat frowned upon my musical ventures. I think it was out of spite to a degree like "HA! LOOK WHAT I DID! I MADE IT!" but the reality of the fact was I wasn't anywhere even close to making a living off of a musical career.

In the Grasshopper days I had delusions of becoming a rock star, but at this point of my life I didn't think like that anymore. I just loved making music, being creative, and hopefully giving something to people that they could get something positive out of. My whole philosophy at this point was that even if I can change one person's life that is all the payment I needed.

I was extremely satisfied with how my two songs with Grift turned out and it was a trip to see a photo of myself in a CD. That could of been the end of the chapter and I would have been more than happy, but unbeknownst to myself this was just the beginning of a much bigger chapter... 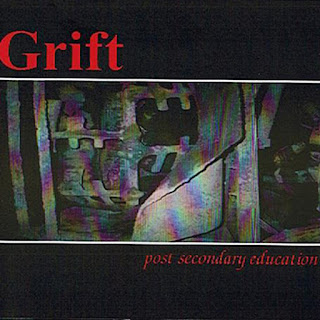