I had mentioned previously that our biggest show was upon us, but before we got to it there were other monumental steps to take. We were guests on the premiere episode of "The Seminal Load" a popular underground radio show on 105.5 CHRY. It was lots of fun as most of our radio appearances had been to date. I may have briefly mentioned this in a previous post but I recently discovered I had a recording of the show on cassette tape, so I decided to try my best to clean it up and I put it online. You can check it out by clicking the link below and hear everything that went down that night as opposed to me having to remember and write about it.

https://theobwc.bandcamp.com/album/grasshopper-radio-interview
The ultra hip record store "Rotate This" was still holding the odd show in their back room from time to time, and somehow we stumbled upon another opportunity for the band. Sloan were in town for a big gig, but somehow the owners of Rotate got them to agree upon playing an off the record set in the back of the store. So who would get the honours of opening up for them? Yours truly mans company of course. It was another big notch in our belt of credentials. 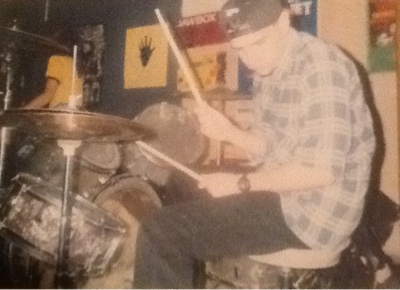 HMV had recently opened their "Super Store" at 333 Yonge street in Toronto, which had actually been open for some time now, and they decided to start having bands perform live in store. With us being essentially close to our peak we ended up landing a gig with a band we considered our rivals, they were called hHead. I can't remember how we landed it or who pulled the strings, but we hadn't been this excited since we were turned down for Breakfast Television because they felt our music was a bit too loud for the morning.

From our perspective they (hHead) seemed like upper class suburban kids who's parents had money, as we were all from middle class suburban families with little money, yet we were kids who grew up in more urban environments clearly. The fact that their guitarist/singer used a lot of the same guitars and amplifiers and pedals that Derek used (or wanted) drove him nuts. That bit of envy alone was enough for D to dislike them, so naturally I had his back, there were however other elements about them that were extremely unlikeable.

They were like... clean cut pretty boys who wanted to be grunge rockers. The way they carried themselves was as if they were better people than anyone around them in the room. An aura of douchey-ness encompassed them and it wasn't hard to see with the naked eye by any means. The few times we exchanged words with them they came across as very smug and pompous, inadvertently saying things that one might take offense to. We were easy going guys and weren't very judge-mental by any means, so naturally we didn't like feeling looked down upon or judged by others. They were talented musicians no doubt, but musically I felt like they were PG-13 and we were XXX.

Beef aside, Grasshopper was excited to play HMV as it just seemed like another great opportunity for us. We were packing clubs on the regular but I was still surprised to see the record store jammed with people in the middle of the afternoon. The coolest part was that the store had a wall on the outer exterior made up of numerous television screens, and they were filming the performance and broadcasting it live on Yonge street at the same time. This drew people into the already crowded store, more importantly people who may have never heard of us and were willing to spend their hard earned cash on our new demo tape.

All in all we killed the show and put on a great performance from what I can remember, I know the crowd loved it so that's all that really matters or ever mattered to me. I always said if I change even just one persons life with my music it makes it all the worthwhile, and worth more than any sum of money. In present time (2014) I ended up finding a few videos from that day at HMV posted on YouTube. The audio is quite horrible but I'm sharing them regardless just for the nostalgia and preservation of memory. I hope you enjoy...