Return of the Beasties

October 1992 had been a very eventful month for myself, my band mates, and my friends. Asides from all the Grasshopper happenings, CMJ, and discovering new music, I learned that my beloved Beastie Boys were coming back to play Toronto on the second day of November. Needless to say it was apparent November was going to be just as good, if not better than October. 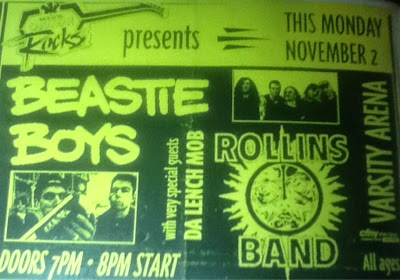 The show was scheduled to take place at Varsity Arena in Toronto, a venue I had never been to before. It was bigger than The Concert Hall, so I feared it wouldn't be as intimate as the show back in the spring. The opening acts were Rollins Band and Da Lench Mob, protégés of rapper Ice Cube. We were all quite excited for the show and Mike C. had but only one mission: to successfully bootleg the show after his first attempt was thwarted by security at the previous concert.
The night of the gig arrived and we were all pumped up. It was a cold night but we didn't let that interfere in our fun. The huge lineup of people were finally granted entry and I got my first look at the inside of Varsity Arena. It was your typical sports complex, very similar to Maple Leaf Gardens. I was a little overwhelmed by the amount of people in attendance, as I wasn't used to crowds this large at live concert, with the exception of Lollapalooza.
We decided to grab some seats to the left of the stage a few rows up for the time being. Mike C figured this was as good of a spot as any for him to safely bootleg the show. We fired up some ganja and sat back to enjoy the gig. Both openers were solid, but somewhat forgettable due to the piss poor job the sound man was doing. His lack of skills combined with the size of the venue led to a very hollow and echoey sound being delivered. I was so used to small clubs and tight sound, that the echo was driving me absolutely crazy. I painstakingly sat through both Rollins Band and Da Lench Mob, patiently waiting for the Beasties to bless us with their presence. I could only hope that the sound man would get his shit together by the time they hit the stage.
That time finally arrived, and I made my way down to the floor. As much as Mike liked to boogie, he stuck to his word and remained seated safely for stealth bootlegging purposes.
Finally the Boys stepped out on stage and broke into the first song on their new album "Jimmy James" The sound didn't seem any better, so I started working my way through the crowd to get closer to the action. Once I passed the soundboard it seemed like the echo lessened a bit, so I inched my way closer to the stage and sure enough the sound quality was much more tolerable. As the Beasties reached the end of the first verse in Jimmy James that leads into the sample "I'm rockin" they surprisingly replaced it with "I'm grasshop, grasshop, grasshopping!" Did my ears deceive me? Had the B-Boys listened to the demo I threw to them on stage a mere 8 months ago? Were they actually giving props to us? I was convinced they were, but I'd have to review Mike's recording at a later time to confirm.
All in all, the Beasties killed it once again, but I didn't like the show as much as I did as the previous one. Perhaps better sound and less people made it a much more enjoyable concert, even though they had just belted out numerous classics with conviction. The show finally came to a close so I went and regrouped with my posse. Alex the journalist had a backstage pass and got to interview the Beasties. After that he was kind enough to give us his backstage pass so we could each a have a chance to meet our heroes. When my turn finally arrived I made my way back to find a large group of fanboys, groupies, and dick riders surrounding the boys. I didn't want to be one of them, so I humbly made my way back out to meet up with the guys. Mike C had been successful in recording the entire performance without incident. We got our gears in motion and headed out to the parking lot. When we got to the van we were shocked to see broken glass on the ground and a missing window. Someone had broken into the van. We were all stunned, and fearful that our gear had been stolen, as we had some of our instruments in the back. Thankfully everything was still there. Derek had two cases of cassette tapes in the van, but noticed one of them was gone. He opened he other one to find his usual assortment of mix-tapes, then he declared "They took our fucking demos!"
Yes, some idiot had broken into a van full of valuable stuff and only stole a case of Grasshopper demos. It was strangely surreal and almost flattering, yet they probably didn't even intentionally set out to steal just our tapes. It was a messed up scene to say the least.
We popped the Beasties bootleg into the tape deck and headed back to Brampton. Sadly the recording was just as echoey as the concert had sounded, but we all collectively agreed they were saying "Grasshopping" during Jimmy James, and that alone made up for the poor audio quality. I told Mike I'd need to make a dub of this ASAP.
We also collectively agreed how fucked up it was that someone jacked all of our demo tapes. One thing was for sure, we'd be keeping an eye open for anyone and everyone selling black market Grasshopper demos...and it was going to be a cold ride home with no window...
Posted by Kabal at 09:26