It had been an amazing year for Grasshopper, and an incredible summer packed to the gills of performances and partying. Our demo was almost sold out and we were gearing up to do another run of 500 with our profit money, after paying back our initial investor of course. William New, who ran the 1150 club, had become very impressed with us, to the point where we never paid for drinks and he allowed us access to the bowels of the club, where we could smoke peacefully and safely in privacy.

In fact Wiilie was so impressed with the turnout of fans we were bringing into his club that he made us a sweet offer. He offered us a gig a week for an entire month straight, that would see us as the headliners with our choice of opening acts. He also gave us any day of the week to pick, and we settled on Thursdays. I'm not sure how we came to a mutual agreement of that, but none the less, for the next 30 days every Thursday would be "Grasshopper Thursday"

It was a success and we packed the 1150 full of people every Thursday. The most rewarding part was getting to select the bands we wanted to play with. Derek seemed to want to control all the choices, but Mike and I convinced him we were at least entitled to book one show each, to which he caved in and agreed. I really don't remember who chose what bands, but I do know 100% that Demon Barf was my number one choice, much to Derek's disapproval. I really didn't give a shit, these guys were my friends, they were good people, and they deserved a chance to gain exposure down in the city. I really can't recall the night very well but I know it was full of rock n roll hijinks and good times. The Epileptic Brain surgeons even came to see us perform, as Steve Waller was down visiting from B.C. It felt great to be performing in front of my inspirational idols, and I smashed the skins with the greatest conviction possible.

Phleg Camp was a Toronto band that Derek admired, respected, and looked up to, so naturally they were one of his picks. They were a three piece like us with a dreadlocked singer/guitarist, but they were definitely a different caliber of musicians. Their rhythm section consisting of Sean Dean on bass and Gavin on drums, were hands down one of the most cohesive rhythm sections I had ever seen in my life. They were also really friendly, cool guys, and through them we met an independent film maker named Kevin Brownfellow. Kevin showed great interest in making a music video for Grasshopper, and all it would cost us would be the price of film. We agreed, and within a week or two the project was a go. 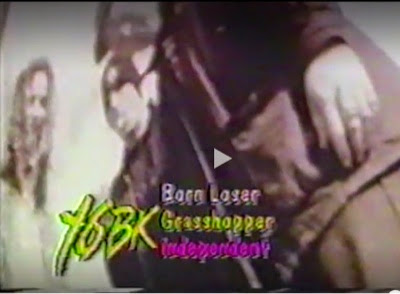 We ran our ideas past Kev, but ultimately we gave him creative control. There were a few specific images we wanted included in the video, such as cameos from The Beastie Boys and Grover from Sesame Street. Mr.Brownfellow informed us that it was illegal to do such, but there was a great loophole he told us about. If he filmed said characters off of a playing television set, the footage was fair game to use in our video. Kevin came to a few of our live shows to get footage, and we went out for a walk one day on the beaches of Toronto to film some more stuff. We came across a large wooden cross sticking out of the ground, so Kev had an idea to film Derek looking like Jesus on the cross, while the sun set behind him in the distance. Mike and I held him up by his feet, how ironic I thought, the backbone of the band supporting the face of the band, just like on stage.

The video turned out great and we were all very happy with it. Kevin sent it off to MuchMusic and we impatiently played the waiting game to see if our video would end up in the rotation, and it eventually did. It felt amazing to watch my own band's music video on television for the first time. I can't even find the words to describe how I felt, but it was almost like a dream.

As our video started getting more rotation on "The Wedge" another film maker from my past would soon re-enter the picture...