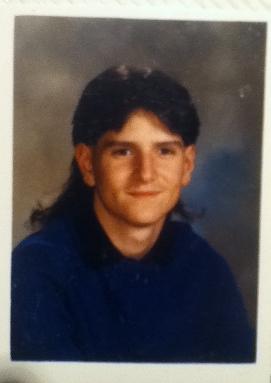 Generally once the school bell rang at 3:00pm I would rush out of that place as fast as I could. I never understood why a lot of kids chose to hang around after school socializing with each other, that's what class was for. I was a man on a mission and once that final bell sounded I always bolted home as quick as I could to watch the power hour on much music and videotape metal vids. I was now practically spending every day after school at Steve's place, so I started bringing my VHS cassette to school with me so I could record metal videos at his place. I had recently discovered through experience and failure that it was essential for me to record every video played on the power hour each day, as sometimes I would miss out on discovering a new cool band. Once I started recording a video that I didn't like, I would stop the tape, rewind a little, and cue it up for the next one played.


This technique ended up very useful on one particular day while recording videos at Steve's place, as I captured and discovered a whole new world of music. There were a series of videos that day that would fall under the categories of thrash, crossover, & hardcore. These videos were "Indians" and "I'm the man" by New York  thrashers "Anthrax", "Voracious Souls" by Bay Area thrashers "Death Angel", "Institutionalized" by Venice Beach outfit "Suicidal Tendencies", "Trapped" by New York's "The Crumbsuckers", "Anthem" by New York hardcore punkers "Agnostic Front" and last but not least "We gotta know" by yet another New York crossover group "The Cro-Mags" For those readers who may not understand this last genre, crossover was a mixture of thrash metal and hardcore punk, which would go on to be my all time favourite genre for the rest of my life, and myself, like this genre of new music I'd discovered, was crossing over.

All of these bands were incredible in their own right and each of them had their own distinct sound. Anthrax was very thrashy and heavy, yet the vocals were a bit more reminiscent to standard heavy metal, except for their song "I'm the man" which was a rap metal song. This concept, song and video blew my mind as my two favourite genres of music had been mixed into one. I would go on to adore this blending of styles for decades to come. Death Angel were also very thrashy with more melodic singing. They were all Philippinozs who were cousins and their incredible drummer was a mere 12 years old. The boys were skateboarding in the video and I was a fan instantly. Suicidal Tendencies were a trip. These guys all looked like Hispanic vatos and gangsters similar to the characters I had seen in the movie "Colours" the song was more so spoken than sang, and the story told was easy for any teenager in angst to relate to.

The last 3 bands all had somewhat of a similar sound, as they were all crossover bands from the New York area. The Crumbsuckers were very fast and technical, and their singers voice was the most unique vocal sound I had heard to date. To this day he still stands as my all time favourite singer. Agnostic Front all appeared to be skin heads, and although their style could be considered crossover, they somewhat leaned a bit more to the hardcore side of the spectrum. The Cro-Mags also all appeared to be skin heads, yet their crossover style leaned a little more towards the metal side of things, as they had somewhat intricate guitar riffs and a bit of melodic-ness to the vocal delivery.

This monumental day still stands out as a very crucial and important turning point in my life, and I can still vividly remember it like it was yesterday. This day stands out in my mind as the day I stopped being a "headbanger" and became a "thrasher" and it was just the beginning of a long and wonderful musical journey...