King Of The Snow Bank

So far in the journey of unravelling my past I have had more memories from grade school then I have middle school, which I find strange as they are older memories. I've been trying to delve into my brain to find stories from middle school but it's almost as if I've hit a writers block.

Middle school to me is a blur of things, not so many of which are music related, which is the kind of stuff I've been digging in my mind for the contents of this blog. All that comes to mind from these 3 years are meeting and making new friends that I didn't know in my old grade school, school trips, wrestling, videogames on the commodore 64, fighting, going to Mackay plaza, getting into mischief such as vandalism and arson, having insult wars, picking on kids, playing handball, watching porn at friends houses on lunch, going to co ed  parties, and chasing down girls.

We were actually quite terrible when it came to the last one on the list. Perhaps it was the discovery of pornography that controlled us like wild animals. On lunch we would generally target girls that were developed, we'd chase them down, restrain them on the ground, and them take turns feeling them up. Looking back on this makes me feel terrible, mainly because this would be considered a form of rape by today's standards. Strangely enough none of the girls ever reported these events to the school faculty. I often wonder if they enjoyed the attention and were experiencing the same sexual angst as we were.

Another favorite pass time of ours on lunches was playing "King of the snow bank" or what i used to call "Battle Royal" being the die hard wrestling fan that I was. This was my favorite game to play but sadly I could only enjoy it in the winter months. There was a giant snow bank at the back of the school due to the snow plowing of the school parking lot. 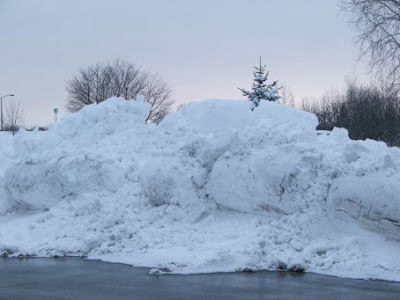 The rules of the game were simple, try and stay on the snow bank while every other kid is trying to push you off, the last person standing atop the snowbank is the winner or the "king" Being one who enjoyed victory, I was ruthless during this game and notorious for blindsiding kids from behind which would send them flying to the cold concrete below. My greatest strategy was to target older and stronger kids in the early stages of the game to eliminate threats, needless to say I found myself on quite a few occasions as "King of the snowbank"
Posted by Kabal at 03:18