The Last In Line

There was another important part of my life that transpired in grade six. Aside from meeting my hetero life mate Jerry, I also made another friend that year, a good friend that would stand the test of time. And it was the power of music that brought us together. Early in the school year I saw a video for a song off of the new Dio album, it was called "The last in line" and it was visually stunning for the time. 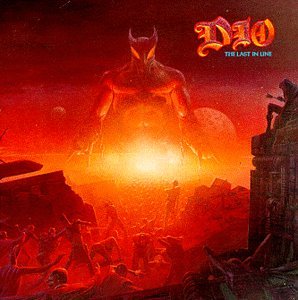 A young male bike courier is delivering a package in an appartment building, the music is calm and serene as he enters the elevator and choses his designated floor. Suddenly the song kicks into heavy mode and the elevator plummets to the ground. The boy quickly finds himself being assembled with other people by some cyborg type demons or mutants.  Folk are being tortured and electrocuted through video games all around him and most of the inhabitants are disfigured and demented. The delivery boy is freaked out and makes a daring escape with the aid of Dio and a weapon resembling a light saber. I loved this song and video and thankfully once again the VCR was on record.

The next day at school I was in gym class and we were out on the field doing some sport or activity I can't quite remember. Even though by this point in my life my father had put me in soccer, judo and baseball, I was never one for organized sports... or any sport for that matter... except wrestling and martial arts. Anyhow we were lined up for whatever drill and dreading the thought of participating I went to the back of the line. Then a thought occurred to me....I'm the last in line! I started crooning the tune as I had already memorized the lyrics from watching the video repeatedly the day prior.

The boy in front of me was a hindu kid who was a foot shorter than me and easily one of the smallest boys in grade 6. He was the second last in line. The kid looked back at me with breakneck speed and excitedly asked "Are you singing Dio? Did you see that video yesterday?" The next thing I knew we were engrossed in conversation about the video and metal in general. This kid didn't look like a metal head at all but he knew his shit, plus he was loving the fact that I was actually the last in line and was singing the theme song for it. I gave him some nickname that I unfortunately can't remember after our chat of metal and gym class being lame and we went our separate ways.

The next day in the hall we saw each other but it was like neither of us were quite sure if we knew each other. I blurted out "Hey! Aren't you (forgotten nickname)?" to which he responded "Yeah! Aren't you the last in line?" We grinned at each other and had a chuckle. The only class we shared was gym so now once a day we had our allotted time slot to shoot the shit. I eventually learned that his name was______