One thing that has been very enjoyable for myself throughout the course of our story so far, is the fact that while writing these memories new ones tend to unveil themselves in the process. This happened once again over the course of my last two part entry and I remembered yet another video that was played that day on whatever show I was watching, "mid-week metal mania" may have been morphed into the "power hour" which aired on much music by this time.

It was called the Pepsi power hour at one point but I can't remember if it was in the beginning or not, regardless I'm to lazy to investigate the matter at the moment. The show opened with some killer tune I had never heard of which I learned a year or two later to be "Angel of Death" by one of my all time faves SLAYER!!! The video I saw this day was similar to the other 3 videos I saw that day. All 4 bands were the fastest, heaviest, gnarliest shit I had ever heard & all 4 bands consisted of only three members.

The band was Motörhead and the song was called "The Ace of Spades" I don't know where to begin with my description as it was mind blowing to take in...machine gun guitar, deep distorted bellowing bass, crazy fast up beat hard hitting drums, and the raunchiest voice I had ever heard in my musical bliss.  I have loved this song since that first day I heard it and if never grows old on me. 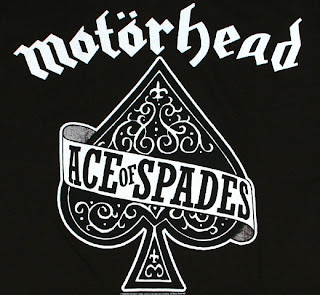 Motörhead were definitely ahead of the times in their approach to music even though their collective influences were basic rock and roll. I've had the pleasure now of seeing Motörhead 4 or 5 times throughout the course of my life thus far, and it's great to see Lemmy is still alive and kicking it all these years later.  Motörhead would be the opening act along with Overkill at the first REAL concert I attended in my life where I wasn't chaperoned by my parents or my sister to see a band I wasn't highly interested in like Kim Mitchell or Gary "U.S." Bonds.

I was barely a few months past 16 when I attended said concert and it was one of the best nights of my life and I still remember it like it was yesterday. It would be its own blog posting in itself and then some to be quite frank. Motörhead were amazing that night and it was the loudest I had ever heard music in my life, until the headliners came on....another 3 piece band.....SLAYER!!!! \m/