Before the summer ended there was a certain something I needed to acquire. After my good old buddy Pat brought me to his cousin Bernard's house, where I saw him using a modem hooked up to his Commodore 64, I had to get one. For the life of me I cannot remember how I finally got my hands on a modem, but I did. I do not think I bought it in a store, as I remember only playing $20-$30 for it. I do remember it was 300-600 baud (speed) and whoever sold it to me did so because they had just bought a newer, faster 1200 baud modem. Never the less I was stoked to get it and immediately went home and hooked it up.

The modem plugged into the back of the 64 similar to a game cartridge. You had to run a phone cable from your wall jack into the in port and plug your telephone's cord into the out port. So what was so special about this modem? Well just the mere fact that it was the newest way to download video games via the BBS (Bulletin Board System) and here's how it worked. Sysops, or system operators, would create their own BBS or  "board" that was generally a reflection of their own personal interest. For example, one sysop who was a fan of The Beatles, had a board called "Octopuses Garden" the title of a Beatles song, and the sysop's alias was "Sgt.Pepper" another Beatles song.

You would find BBS numbers on loading screens of games, so you would write them down on an ongoing list. When you were ready to rock you would dial a number, wait for the modem to answer on the other line, then flick the switch on your own modem to connect. You were now inside someone's "board" or computer, this was essentially the first p2p sharing technology long before the Internet would grace our lives. 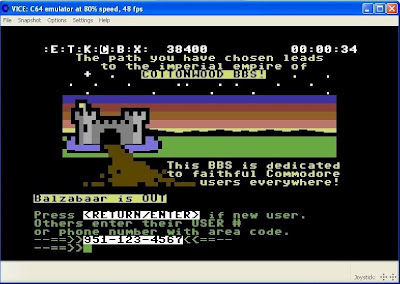 Once you were in there would be a title screen for the board, and some of the artwork people were doing with the c64 was just incredible. Once past the title screen you came to a menu which usually had 3 categories: the message board (for posting messages), the bulletin board (for posting user created artwork), & the game room, obviously for posting games. Every BBS lived by the same rules of conduct: you had to post in the message forums EVERY login before you could access the game room. When you were in the game room, there was a 5:1 download/upload ratio, meaning for every 5 downloads you took, you had to upload one. If you broke the rules you would be banned from the board, and possibly blacklisted from all the other boards. Needless to say everyone followed the rules without question.

Due to the fact a BBS worked via phonelines, there could only be one visitor on a board at a time, so most the boards had a 60 minute time limit that you also had to abide by. If you didn't, chances were the sysop would disconnect your ass simply by picking his or her phone up. There were a variety of boards with various themes to suit anyone's interests. I ended up spending most of my time at a place called "The Graveyard" which was run by two brothers, SkaterPunk & Necromancer. They ended up giving me an assistant sysop position under the alias "Leatherface" and eventually hooked me up with software to create my own board "Texas Chainsaw Farmhouse" much to the dismay of my parents, who got tired quickly of the phone ringing all the time at all hours of the day and night. Eventually they got me my own phoneline and a phone that you could turn the ringer off.

I lived on the boards to the point where I hardly ever went out, and if my friends wanted to hang out they had no other choice but to come hang out at "the farmhouse" I had made a lot of friends via the message forums and I got into cracking games. Cracking a game consisted of breaking into the code of the game where you could add in your own loading screen that promoted your BBS. I had more games than ever now and was constantly elevating my illustration skills to post on the boards for everyone to see.

At the peak of my fun, somewhere in grade 9 or 10, my modem speed was deemed to slow for the BBS world, as everyone had upgraded to 1200-2400 baud. I could not find a new modem anywhere and they were quickly becoming obsolete, plus money was an issue. I was however getting into partying and having a social life, so I slowly faded away from the BBS world. Who would have ever dreamed of having something as powerful as the Internet years later? I was just thankful to be apart of the pre cursor to the World Wide Web...
Posted by Kabal at 21:15