Shortly after my first visit to The Graveyard with SkaterPunk, who had now changed his sysop alias to "NivekOgre" (lead singer of Skinny Puppy) or to put it more simply "Steve's house" I found myself digging through their record crates once again, when I stumbled upon a most interesting and provocative piece of album cover art that demanded my attention. It was a portrait of Ronald Reagan and his wife Nancy, in what appeared to be the White House. In front of them on a platter was a fresh fetus covered in jelly beans. The band was called "Day-Glo Abortions" and the album title was "Feed Us.A Fetus" cleverly designed to at first glance appear to read "Feed USA" I pulled the record out of the bin and promptly asked Steve what this was all about. His eyes gleamed and his smile broadened as he insisted I hear this album immediately. 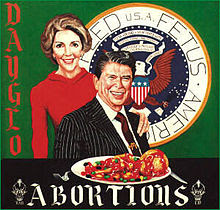 The first song he put on was called "Kill the hosers" although I remember at first thinking it was "kill the posers" The song started off with a very fast, higher toned, raunchy guitar riff followed by a lightening quick drum roll that brought the band together in what was easily the fastest song I had heard to date in my life. The only thing I had heard prior that was mildly comparable in speed was Motörhead, but the sound of all the instruments, including the vocals, was completely different in sound and approach. The guitars were actually quite different from what I was used to hearing in all the rock and metal I listened to growing up. The drums were constantly full speed ahead with the exception of the odd breakdown or slow part, and they just sounded more raw than metal drums generally sounded. In fact everything sounded more raw, which a portion of the reason being that the recording quality wasn't as slick as a major label artists would be, but none the less this shit was insane and I was fucking loving it!

The vocals were also very unique in their own right. The singer had a bit of a higher pitch to his voice, with a nice blend of raunch, very similar to their guitar sound. I didn't think for a second this guy had any form of vocal training, as he was more so yelling than singing, but in rhythm that fit perfectly with the music. There was definitely an intense energy to this vocalist as well, which was also a clear observation just by looking at the band photo on the back of the LP. The photo was a shot of the band performing, and that still, black and white image clearly captured the energy and intensity of this band. The lyrical content was extremely controversial, yet comical if you actually got what they were doing, which I perceived as blatantly and sarcastically portraying stereotypes associated with hard music. Kill your father, rape your sister, kill yourself type of stereotypes, and I dug it immensely. 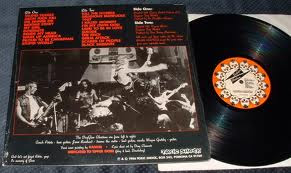 I found it amazing and inspiring that the band was from my native land of Canada, but on the opposite coast hailing from Vancouver. Each band members name and instrument played was listed on the back of the record, and with aliases like Jesus Bonehead & Wayne Gretzky, you knew they had a sense of humour, and just didn't give a fuck. I thought to myself "how cool is it that these guys don't even care if people know what their names are? They could care less about the fame and fortune, it was all done for the love of the music" music I was now in love with called "Hard core punk" better known as "Hardcore" If someone had told me on this day in grade 9 that I would go on to perform with my band as an opening act for the Day-Glo Abortions a decade later I would have suggested they check themselves into a mental health facility.
Posted by Kabal at 03:17