A few weeks into grade nine I was chatting with Skater Punk on his BBS The Graveyard when we made a startling discovery, we both were in grade 9 at the same high school. The next day we eagerly met and began to chat. I immediately recognized him, as we were both goaltenders in the same hockey league. His name was Steve. Steve invited me over to his house after school to meet his brother the Necromancer aka James. I instantly agreed. Steve and James literally lived across the street from the high school, so once the final bell rang we met up and headed over to the graveyard. What a small world I thought to myself, it seemed even smaller when we approached Steve's house and I discovered that he was actually the next door neighbour of my good old buddy Patrick Yang.

Steve introduced me to his brother James, whom I also recognized, as he was in our high school as well, but he was a few years older than us. We headed down to the rec room where they ran their BBS. James was a DJ and he had some turntables and a mixer set up. Being a huge fan of vinyl, I went straight to his record bins and started digging through the crates. The brothers knew I was a huge fan of the film "Texas Chainsaw Massacre" and they wanted to play me a song that contained samples from the film. The song was called "chainsaw" and it was by a Canadian industrial group named Skinny Puppy. This was my official introduction to industrial music. 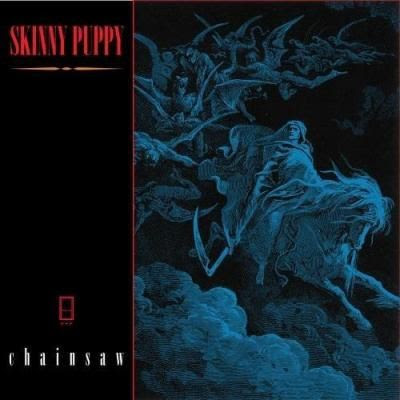 I remember it being quite different than the metal I was used to. At first I didn't know what to think of it, but I must admit the song grew on me very quickly. I'm sure being inspired by one of my favourite movies made me more inclined to listen with an open mind, which I did. The guitars were heavy, the vocals were highly distorted, and the drums were electronic. I'd never heard anything like this before and I was digging it. We listened to the record a few times while Steve and James gave me an inside look at their BBS.

These two guys seemed very nice and genuine, as was their father who I met later that day. I remember him razzing me for being a smoker and he warned me that I'd better not get his sons into smoking. For a man of small stature he was somewhat intimidating, plus most parents in the past dismissed me as a bad kid and a bad influence. It didn't take me long to figure out their father was joking around with me, especially once James lit up a cigarette at the kitchen table. Their dad was actually a really nice man and was quite laid back despite his loud voice and intense eyes. We sat around the kitchen table chatting and smoking for what felt like hours. I can remember thinking to myself "why isn't my dad this cool?" Regardless, I really enjoyed this new environment and the time I spent there. I'd definitely be coming over again soon..
Posted by Kabal at 03:34