I was a few weeks into high-school and my life was changing rapidly due to a whole new world of changes I was being introduced to. After capturing all those new thrash and hard core videos at Steve's that fateful afternoon, I now found myself digging through completely different sections while I frequented the regular record stores in the Bramalea City Centre. I was somewhat shocked and surprised to find a few of the bands I had seen that day. Anthrax, Suicidal Tendencies, & Agnostic Front, all had records and or cassettes for sale in a mainstream record store which I found interesting, as I had never thought in a million years that bands like these with such an extreme sound would actually have record deals and major distribution, but I was sure as hell happy that they did!

At some point in September of 1987 my mother informed me I was due for a visit to the dentist. I absolutely dreaded going to the dentist as I had already had my fair share of cavities, gargantuan needles, and nauseating drills, which made nails on a chalkboard sound like sweet music. Now that I was in high school my parents were being a lot more lenient with me, finally letting me grow my hair and letting go of their little boy, which in turn had now caused me to develop a bit of an attitude and I was more opinionated than ever. I told my mom I had no interest in going to see the dentist, which led to an argument that concluded with me using a form of extortion in a sense, as I informed her I would not go unless she took me to buy a record afterwards. She agreed.

After my visit to the dentist took place the following week, I found myself in Sam the record man looking to make my first ever purchase of this new genre I had discovered. I already knew in my mind it was going to be Anthrax or Suicidal, but low and behold they didn't have either band in stock on vinyl. Never one to be bested or discouraged, I simply went over to the cassette section. I can vividly see myself standing there with a cassette in each hand, in my left was Anthrax's "Among The Living" and in my right hand was Suicidal's "Join The Army". I stared at both covers in awe and was very taken back. I flipped them both over and read all the song titles and realized that I knew the song "Indians" from Anthrax, but the song "Institutionalized" was NOT on the Suicidal cassette. The decision was made and I purchased Among The Living. 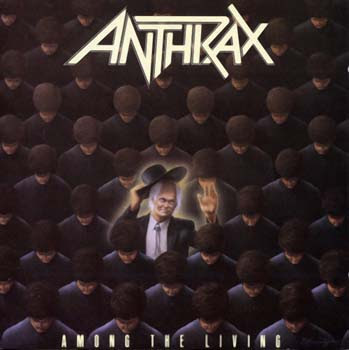 When I got home I went right to my room and threw it on. I listened to the tape 2 or 3 times straight through, my eyes closely following the lyrics with great intensity the entire time. Eventually my mom called me for dinner, and as soon as I was done eating I was back in my room blasting the tape again. I was absolutely enamoured with it and fell in love. The lyrics all revolved around things I already had interest in, horror, comics, and life in general. They even had a mascot named The NOT man, a rubber novelty toy. Not man was a small rubber face you put your fingers in the back of so you could manipulate and change his face. The ironic part was i had actually stolen one of these from the "It store" months before i knew about the "Thrax" so i religiously carried him around in my pocket with pride. Anthrax were now my new AC/DC. I was so inspired that I went as far as to start using a new alias in the BBS world, you guessed it....Anthrax. I even started designing a new board called "Among The Living"
I was already a metal head that loved rap music as well, so my attire was somewhat a blend of the two. Tight jeans, leather jacket and fresh Adidas sneakers, topped off with an Adidas or band t-shirt....oh and my sweet mullet, which know had grown quite long in the back and I had shaved lines in the sides of my head. Anthrax were somewhat similar in style but they had a bit more flare, rocking jam shorts and hats similar to something Run DMC would wear, so naturally i began to assimilate. When I saw their video for "I'm The Man" it rampaged my senses, as these guys got it like I did, we were unknowingly on the same page. Rap was an amazing art form that was shunned upon by metal heads and people in general, but we were open minded enough to see the similarities it had to metal as far as rawness and attitude went. Anthrax was my new god, and Among The Living was my new bible...
Posted by Kabal at 12:44