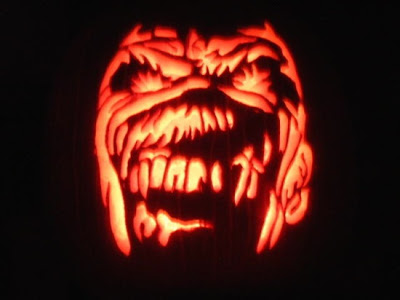 Halloween was rapidly approaching and with it came the first school dance of grade 9, the Halloween dance of course. I was quite excited as Halloween was and always will be my favourite holiday season. There was only one slight problem, I had no idea what my costume would be this year. It wasn't until mere hours before the dance that I came up with a costume idea, I decided upon dressing up as Scott Ian, rhythm guitar player for the almighty Anthrax, my new favourite band.

Looking back now on this I can honestly say my costume wasn't the most original idea, as I was pretty much dressing up the way I would normally, just with a bit of extra flare. On my feet were my brand new Patrick Ewing Adidas shoes, adorned with two different tube socks, one with blue stripes and one with red stripes. I put on my most colourful pair of jam shorts, thankfully it was a mild evening. I had a blank hockey jersey that I modified. I cut the sleeves to 3/4 length and illustrated a big picture of the "not man" on the front, on the back I drew the anthrax logo across the shoulders where your last name typically would be, and adorned the back and shoulders with a number. The number now escapes me but I have a feeling it was either 69 (for obvious reasons) 87 (the current year) or 14 which was always my number in hockey. I used my sisters crimping iron to straighten my hair and make it appear a bit frizzy like Scott's. I topped the costume off with my Mike D hat and sunglasses, I was ready to rock. I met up with Jazzy Jeff, Eggman, and a few others at a park behind the strip mall close to our high school. One of my friends had recently discovered that his father smoked hashish, so he brought a piece of hash with him he had stolen off his old man. Jeff had a bottle of booze he had stolen from his parents. We hung around the park for about an hour passing joints and the bottle around. Once we were all feeling good we headed over to the graveyard to meet Steve and his neighbour, and my old friend Pat, who had an amazing Freddy Kreugar costume. From there we walked across the street and were at the school.

I remember we almost didn't get in due to the fact we were clearly inebriated, and if I remember correctly Jeff eventually got kicked out of the dance for being so drunk. The dance was clearly not my scene as the music being played was terrible top 40 bullshit. Eventually there was either a heavy song, or a public enemy song played by the DJ that fired us up to the point of starting a mosh pit. I was ecstatic that I finally had the chance to try out my new dance moves, which resulted in both boys and girls hitting the floor hard.

The next thing i knew we were being hauled into the office for our "violent" behaviour. The principal was treating us like we had committed some heinous crime, like killing the president or something. We were given one choice, leave now or risk facing possible suspension. Humbly admitting defeat we decided to leave the dance. All in all it was one hell of a night and a pre cursor to an ongoing trend that would follow, which was me getting kicked out of places for moshing...
Posted by Kabal at 03:14