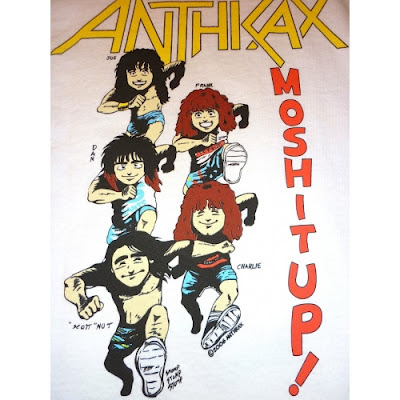 Another new and wonderful thing I had discovered through thrash and hardcore music was the insane dancing that was going on in the audience during these videos I was watching. There were people flailing about, fists and feet flying everywhere, bodies smashing into each other, and people jumping off the stage and into the brooding crowd. I was fascinated by this behaviour as I was used to people simply banging their heads and throwing devil horns up with their index and pinky fingers. Anthrax was the band responsible for educating me on the word "mosh" and/or the action of "moshing" a term that became very muddied by mainstream music later on in the early to mid 90's. So let me break it down to you with some help from Wikipedia:


Moshing, in a strict sense, is a style of dance whose participants push or slam into each other. It is most associated with "aggressive" music genres, such as hardcore punk, rock and heavy metal. It has also been emerging in the heavier club genres like dubstep and drum and bass. It is primarily done to live music, although it can be done to recorded music.

Many variations of moshing exist, and can be done alone as well as in groups. Common events in moshing would be a "circle pit" or the more extreme wall of death, and are typically done in an area in the center of the crowd, generally closer to the stage, mosh pit or simply pit. A mosh pit can open up anywhere in the crowd by means of "crack-back" (where a group pushes back against everyone around them with their arms outstretched), people shoving each other into others until space is made, or simply swinging their arms and legs violently until space clears around them.

While moshing is seen as a form of positive feedback or expression of enjoyment, it has also drawn criticism over its dangerous nature. Injuries and a few deaths have been reported. However, it is generally agreed that moshers are not trying to harm one another, and that they follow an unwritten "moshing etiquette". 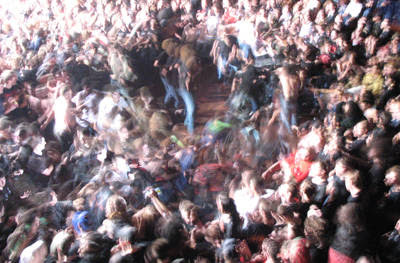 So there you have it. Add in the chaos of slam dancing & stage diving and you can only imagine the type of intensity that was taking place. I had never danced in my entire life with the exception breakdancing and dancing with girls to slow songs at school dances, and moshing would be the extent of my dance moves, if you could even call it dancing. I turned a blind eye to metal and decided it was no longer cool to headbang to aggressive music. My new outlook was "mosh or die"
Posted by Kabal at 03:16