During grade nine my older friend John McCuish told me about a radio show one day that catered to thrashers and punkers. The radio show was called "Metal up yer kilt" and it was hosted by a fellow named Brian Taylor. The show was on a station called CKLN and it was at the far left end of the radio dial on 88.1fm. CKLN was my first exposure to "college radio" as it was affiliated with Ryerson University. The show only aired one night a week, it was either Mondays or Tuesdays if my memory serves correct. I believe the show spanned from 11pm to 1am.

The first few times I tried to tune in I ended up falling asleep within the first few minutes, as I was always dead tired by 11pm. Eventually I just started recording the show onto cassette tapes that way I could catch up on all the stuff I was missing out on during my slumber. Thankfully by doing so I was able to discover all kinds of new bands, like Madball who I mentioned a few posts ago. Brian played a song of theirs called "wake up and smell the bacon" and I was a fan of it instantly. The fact the singer was a 14 year old kid such as myself was very inspiring to me, not too mention he was being backed up by his older brother's band, Agnostic Front.


Another band I discovered on the show was "Death" from the Florida area, and I fell in love with the extreme sound they provided. Death would later go down in history as the band that essentially coined the term "death metal" and put the genre on the map. They were also considered as early pioneers of the "grind core" scene. 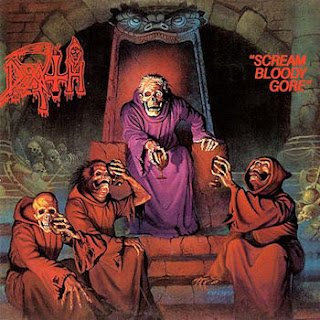 Another stand out from the show was a New York crossover act called "Ludichrist" I recall Mr.Taylor playing a few of their songs and it blew my mind. They were thrashy, hardcore, yet they contained elements of rap music that most metal heads probably would not have recognized. Seeing as "rap core" was my thing, Ludichrist now sat close to the top of my list of favourite bands.

I was so excited to play these tapes for my friends and introduce them to all these new bands. I'm not sure if they were as excited as I was, but they all seemed to dig the music I was exposing them to. I was eager to hit up the mall and see if I could find some records or tapes from these new bands, much to my dismay not one of the three record stores in the mall had any of them.

When I tuned in the next week Brian played a new record from a band which escapes me at the moment. The name of the band clearly isn't important at this moment in the story, what is important is the fact that Brian mentioned you could pick their new release up at "The Record Peddler" on Yonge street in Toronto. I now had a new mission in mind for my next excursion down to the big city...find the "Peddler"