The day of the Slayer concert had finally arrived and I was super stoked! Early in the day I headed with Noel over to this guy Mike's house. Mike was another older guy in the group. Word had it his family had inherited tons of money from a family member who was an inventor, or something along those lines, and judging by the size of his house and his numerous vehicles he owned, it was safe to say the word on the street was more than likely true. We hung out and blazed a joint then Noel left to go pick some of the other guys up. We ended up meeting somewhere with our 2 vehicles packed with people for a doobie rendezvous then we were on our way. I was lucky enough to go in Mike's car, a red iroc with quite possibly the loudest stereo system I have ever heard.

The whole drive down we listened to "south of heaven" by Slayer and "Nations" by Public Enemy. I felt so cool driving in this kickass car smoking weed and listening to music so loud it drowned out anyone around us. Oh and did i mention more joints were burned? When we arrived in Toronto we met the guys at an underground parking lot where we drank some beer and smoked even more joints, which caused us to miss the opening act "Overkill" of whom none of us were really fans of so it wasn't a big deal.

The next thing I knew a police cruiser pulled up and the cop started questioning us. A lot of guys had dope on them and Mike's car was loaded with stolen stereo equipment. Just as things were starting to look bleak, the officer's partner called him over to another vehicle he was checking out which was full of guys drinking booze and carrying on. The cops diverted their attention to said vehicle and allowed us to go on our way.

As we stood in line at The Concert Hall a.k.a. The Masonic Temple, I gazed over all the people in line. There were thrashers, punks, skin heads, etc. all walks of life loved Slayer apparently. Even though it was winter I didn't even notice due to how inebriated I was. We finally got inside after presenting our tickets and the first thing I did was head to the merch table with Noel where I purchased a sweet "South of Heaven" concert shirt, it had the album cover on the front and an image of the band on the back with the caption "World Sacrifice Tour 1988" I was so giddy to finally own my first concert shirt that wasn't handed down to me from my sister.

Noel was a HUGE Slayer fan and he wanted to make a bootleg recording of the show with some equipment he snuck in. Noel wanted to sit up in the balcony so he could get a proper recording. I decided to sit with him since this was my first show and needless to say I was a bit intimidated to join the action on the floor. The other guys left their jackets and shirts they had purchased with us, then headed down into the danger zone. Noel and I had a great spot, front row of the balcony. His recording device was ready to roll, his joints were ready to burn, and the time had finally come... 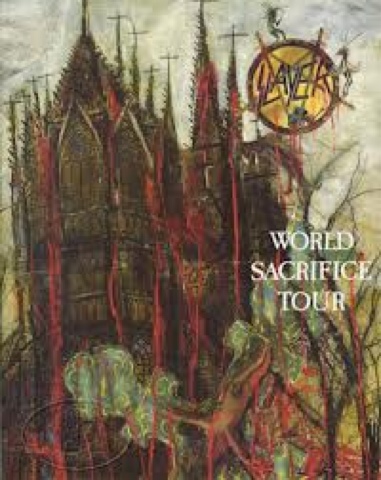