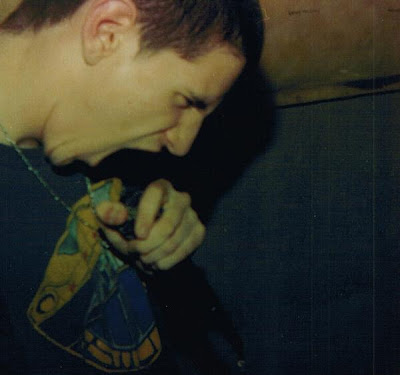 With all the new and exciting things going on in my life, I almost forgot we still had an active band. We had still been jamming religiously every Saturday afternoon at Ryan's place, and we actually had a few songs under our belts, a few cover songs and a few originals.

As far as cover songs went, we mainly stuck to our favourite bands/songs. We covered "The Bag Lady Song" by The Accused, "I Killed Mommy" by The Day-Glo Abortions, "Spandex Enormity" by M.O.D., and "Loss For Words" by Corrosion of Conformity. We also did a parody version of Tone Loc's "Wild Thing" but our version was called "Static Cling" (about doing laundry) and we had two renditions of it, the rap version and the hardcore version.

The first original song we composed was called "Suck my nose until my head caves in" a line Jerry and I had heard in some cheesy 80's t&a comedy movie. We ended up later changing the title of the song to "Kevin Does Coke" as well as changing all of the lyrics. Somehow rumours started flying around town about yours truly being a "coke head" which was hilarious to us, as all of my true friends knew how against the drug I was, I had never even tried it.

The next original song we wrote was called "Will-nots" and it was somewhat in the vein of Minor Threat and The Cro-Mags. This little ditty was about those annoying shitballs that get stuck in your ass hair and "Will not" come out. This ended up being one of my all time faves of our songs, it was catchy, upbeat, fast & heavy. We would go on and continue to write a few more originals including "The Brady Bunch", "Curry Cookies", "Left 2 Die", "The Reject", "Cotton Pony", and a couple more that weren't quite as memorable.

Things were shaping up and getting a bit more serious, and we were getting a bit more serious despite the obvious comedic subject matter in the lyrics of our songs, just like our heroes E.B.S. & Curious Mold. For some reason our band name wasn't sitting right with me anymore. G.P.K. or Garbage Pail Kids, didn't have the same ring to me as it once did. Perhaps now that I was 16, I found the name to be too juvenile to match the music we were making.

The time had come YET again for ANOTHER name change...
Posted by Kabal at 13:51