Not the National Wrestling Alliance 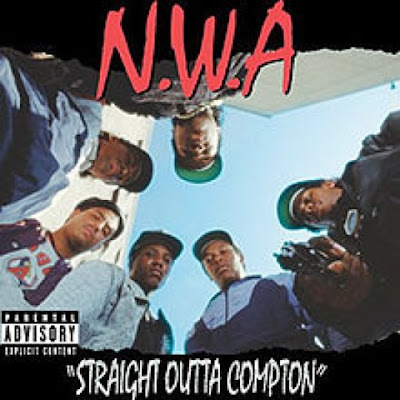 Being a fan of rap from the moment the flood gates opened, I had the privilege of hearing and discovering all sorts of groups right from the get go. Grandmaster Flash, RUN D.M.C., Public Enemy, Kurtis Blow, The Fat Boys, LL Cool J, Twin Hype, Boogie Down Productions, Biz Markie, Fast Eddie, Erik B. & Rakim, Big Daddy Kane, EPMD, Schoolly D, Beastie Boys, and 2 Live Crew, these were the early pioneers of the music and essentially all that was available to the public. One thing they all seemed to have in common was that they all came from the east coast.

Little did I know that out on the west coast there was a whole new world of rap I had yet to discover, but it wasn't JUST rap, they had their own flavour going on out west, it was called "Gangsta Rap" pioneered by the first west coast rapper I ever heard, Ice T. I could go on about Ice but I shall save that for another day. On this particular day I truly have no memory or recollection of how I acquired it, but somehow I got my hands on a cassette tape called "Straight Outta Compton" by a group named N.W.A. (Niggaz With Attitude) The album cover depicted a group of black men in a circle staring down at perhaps you, the victim on the ground. Genius idea I thought to myself immediately. I also knew I didn't want to be the guy on the ground.

I had always been comparing the parallels between rap and hardcore, but this new tape just solidified my philosophy on the matter as this was some seriously hardcore shit! The crew was made up of 6 members, DJ Yella, Dr.Dre, Arabian Prince, MC Ren, Ice Cube, & Eazy E. The beats and music were extremely aggressive and in your face, somewhat similar to Public Enemy. Each MC had his own unique style and voice, and they had no qualms about getting in your face with it, their delivery almost more of a yell as opposed to the laid back raps of the easy coast style. Needless to say I was completely enamoured from the moment I heard the opening line of the first song. With track titles like "Fuck Tha Police" & "Gangsta Gangsta" N.W.A. painted a portrait of the street life out on Los Angeles and they definitely weren't afraid to say anything.

I truly thought these guys were legitimate killers, at least that's what some of the lyrics portrayed. Previously to this group, I had never really heard many rappers talk much about having guns and murdering people, but it seemed like that was all these guys did! I wondered how they could admit to heinous crimes on a recording without fearing the backlash they could suffer if the wrong ears heard such words. Eventually I came to the conclusion that they weren't really killers. I thought perhaps they were involved with the gang life at one point in their lives, and now through the salvation of music they could escape the gangland warfare and tell their tales. Whatever the story was, it didn't matter to me. All I knew was these guys made some awesome music and kicked the ass of my ear drums.

N.W.A. were also responsible for everyone and their mother wearing L.A. Raiders gear. Jackets, hats, toques, you name it. Raiders gear was everywhere you looked and it appeared everyone wanted to be a "Gangsta Gangsta" myself included. I stood back from the flock of Raiders sheep and wondered what new sounds may spawn from the west that I might be fortunate enough to encounter...