After the Slayer concert, another cold, heartless, and forgettable winter had passed and the fresh scent of spring was in the air once again. It was time to bust out the jam shorts and skateboards. It was time once again for underage drinking in public places while we searched for parties. It was also time for a major change in my life.

I wasn't very happy with the way my hair was growing. A few of my friends had shaved their heads and now I too was contemplating it. Now that I was more into hardcore punk as opposed to metal, hair didn't seem that important to me, and as the age old saying goes "Hair doesn't make the man"

One day on lunch a few friends of mine were heading over to a buddy's house for lunch and haircuts. I decided to tag along as the time had come to shed these long locks of mine. I was so eager and excited that I asked to be first. The "barber" in charge asked me which level of guard I wanted on the clippers. I insisted on no guard as I wanted my head shaved down to the skin.

It was such a strange feeling, going from a full mop of hair to a clean, bald head. When I returned to school after lunch all of my female friends were in shock, and practically in tears, over the fact I had removed my hair.

I was anticipating going home at the end of the day to show my folks the new doo. I assumed they would be happy that I didn't have long hair anymore. Much to my disbelief my mother flipped her lid screaming "why did you cut your hair so short?" I couldn't figure out why she was so upset. She absolutely despised my long hair and now she despised the fact that I had no hair! There was no winning this hair battle. Parents. Go figure... 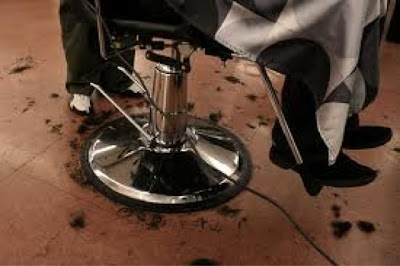