Our seats were claimed, the merch was bought, and the stage was set, it was finally time for the music to come to life! As I looked over the balcony I scanned through the crowd, everyone seemed rowdy and blood thirsty. I was even able to pick out the EBS boys as well as a few other familiar faces in the sea of metal below me.

Finally Motörhead hit the stage, I remember thinking there was an awful lot of room for the 3 band members up on that massive stage, none the less Lemmy stood out like a Greek god on the foot of the acropolis with the sun shining upon him, or in this case the stage lights. Motörhead ripped shit up in a hurry and demanded the attention of every person in the room. They belted out all the classics like orgasmatron, killed by death, chase is better than the catch, and of course their eternal hit the ace of spades, to which the crowd erupted in a frenzy of madness. One thing was for certain though, I had never heard music that loud in my entire life, and Motörhead claimed to be the noisiest band in the world.

I ventured down to the bathroom for a quick piss before Slayer came on and had to bob and weave my way through the leather and denim clad hair giants, I almost felt like a lost kid on his first day of high school, nervously searching for his home room or locker. I managed to make it back to my seat and patiently awaited Slayer.

The lights went dark, the crowd erupted, and the opening riff for "South of Heaven" kicked in. The first song on the new album. Years later after seeing Slayer a few times I realized they always opened up with whatever the first song was on their newest album. So I thought Motörhead was the loudest thing I had ever heard but Slayer was just a few notches higher on the volume dial. I honestly thought my brain was going to explode and bleed out of my ears! I had never smoked as much dope as I did on this particular day before and it was taking its toll on me. I hit the burn out phase and could barely keep my eyes open, only the extreme loudness of Slayer kept my eyes barely propped open.

I gazed down at the action below and was thankful for my comfy seat, as it just looked like absolute madness and murder was going on in the pit. When the band finally broke into "raining blood" I couldn't believe my eyes, it was actually raining bodies for the whole song, and by that I mean there was a non stop flow of people diving off the balcony onto the unsuspected people below. I had never seen anything like this, it had to be at least a 15-20 foot drop. Absolute insanity.

When the song "Angel of death" kicked in it was quite apparent that this was the encore and the final song of the night. With the stage lights all emblazoned in a fiery red, it was easy for one to forget where they were and feel like they had just stepped into the bowels of hell. Once the music died and the smoke cleared it was time to go home.

I had finally attended my first REAL concert and it was amazing experience, I couldn't wait for the next one, despite the fact that it took about 3 days for me to regain my hearing properly. Thanks Slayer!!! 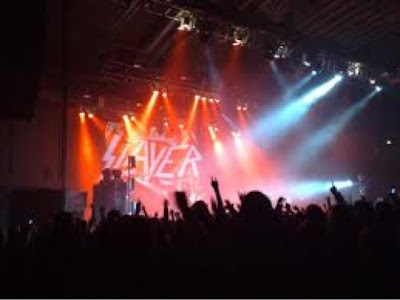