The Legend of Schoolly D 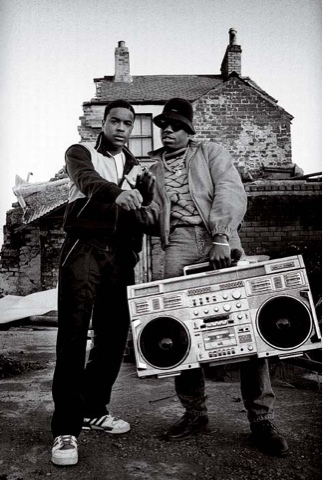 Once again I find myself having to backtrack in this story, thus breaking the chronological order, which is difficult with my OCD, I like things being in order. I feel this subject is very important to the story and the history of music in general, so please join me as we travel back to Christmas 1988.

There was a huge musical happening in the year 1988 that would forever change the world of music, the introduction of the compact disc or "CD" which to me looked like some form of computer disc. The compact disc had actually been commercially available to the (rich) public since 1982, but now it was becoming affordable worldwide. The cd was the latest high definition technology for listening to music. I immediately saw this as evil, since I figured it would extinct the world of cassette tapes and vinyl records, plus I was already a firm believer of technology equaling evilness. None the less my parents had boughten me a CD player for Christmas but I was very reluctant to buy any CDs.

While five finger discount shopping at Discus in Bramalea City Centre on various occasions, I kept noticing a CD entitled "Am I Black Enough For You?" by none other than Philadelphia native and gangsta rap godfather Schoolly D. I had only ever heard one or two Schoolly songs on a dubbed cassette Sanjai borrowed from a friend back in 1986, but for some reason I held him in high regards. Even though Ronnie who worked at Discus had virtually given me carte blanche to steal whatever I wanted, I felt like I had to buy this Schoolly D cd with my own hard earned money. CDs were alot more expensive too ranging anywhere from $20-$30 before tax, and it seemed rap CDs were the most expensive as they were always slapped with a "special import" sticker. I could never figure that one out, majority of rap music was coming out of New York, the same place a lot of thrash and hardcore was coming from, yet they were never stickered as special imports. I figured it was some sort of conspiracy to prevent youth from getting their hands on rap music. Regardless I dished out the $24.99 plus taxes and went on my merry way.

I got home and went through my usual new release ritual, and I couldn't get enough of this cd! As I started spreading the word amongst my friends I was a bit surprised to learn that none of them had even heard of Schoolly D before. I did my best to promote him and spread the word. Sadly, Schoolly never really received the recognition he deserved yet I still to this day hold him up on a pedestal as one of my top 5 all time favourite rappers. Much like the hardcore bands who were grinding it out in the clubs, releasing numerous records, and not making money while staying true to themselves, Schoolly D was doing the same thing, he was constantly releasing solid records, smash hit singles, yet every record he put out was a failure as far as record sales and making it on top 10 charts went. I still fully admired Schoolly and respected him for doing what we wanted to do musically and not changing his formula to appease major commercial success.

Another thing I loved about Schoolly D was the fact he epitomized what I believe rap to truly be, the art of story telling, and Schoolly could tell stories for days that ranged from gang activity to humorous comedic elements to conscious political blacktivism and so on and so forth. Schoolly's beats from the songs "Saturday Night" & "P.S.K.What Does It Mean" have been sampled and re used countless times over the last 30 years by various artists and I don't think he even got recognition for it most of those times, yet nameless one hit wonders have cashed in off of his creations essentially.

Even now, 2 decades later Schoolly is still making records and having the same results as far as his sales go, he did have some music in various films, he's scored movies, and even wrote the theme song for the animated television show "Aqua Teen Hunger Force" I truly feel this man never got the true recognition he deserved and I can only hope and dream that he is making money these days with his latest efforts.

Call him underground, or a cult classic, or whatever you want, but I can't help but feel that Schoolly was and still is a true musical genius, a legend in the rap game, and a very detrimental piece of importance to rap music and its history. I honestly think that without him we would not have seen many of the classic acts that we were blessed with over the years.

If you've never heard Schoolly D then I strongly urge you to do so, and don't just download his music, pay tribute to a true legend and go buy some of his stuff, if you're a true fan of rap then I guarantee you'll thank me for it. May the legend of Schoolly D live on...
Posted by Kabal at 14:01