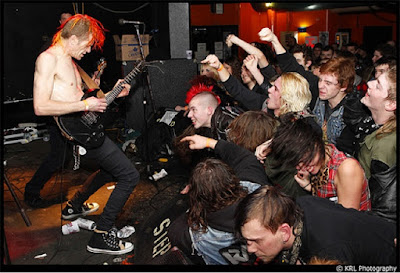 I had almost forgotten about the subject matter for today's blog post, thankfully I have a notepad of ideas written down to help me remember such things. I'm going to back track slightly for todays story, just a few months back before the summer break became official. To be exact it was somewhere in the month of may I believe, or perhaps April...it might have even been March...ok not so exact. The point of the matter is I was going to my first hardcore punk show featuring Toronto locals B.F.G.s (BunchoFuckingGoofs) opening up for none other than the west coast punk kings of Canada, The Day-Glo Abortions. I went down to the show with my friend Julie AKA "Boots" a female skinhead and one of my closest friends. I can't even remember if we bussed it down or got a ride but regardless we made it there.

The show was at "The Siboney Club" on Augusta, right in the heart of Kensington Market. B.F.G.s opened things up with their own brand of punk rock, and musically they didn't really do much for me, but I couldn't deny they put on one hell of a performance. At one point they brought out some old T.V. sets and placed them centre stage, then their vocalist "Steve Goof" proceeded to start smashing the televisions with a sledgehammer! There was glass and debris flying everywhere, and in such a tiny environment it was hard to dodge the air born shrapnel.

The venue was small, dark and smokey, and I loved it. Nothing beats seeing a great band in such a small, intimate setting, and the electricity in the air was undeniable. So much in fact that I couldn't resist the urge to get into a mosh pit for my first time. Day-Glos were only two songs in when I jumped in the action. The slow, skanky riff of "Fuck Satan to Death" was just too groovy to deny. I think I made it one or two full rotations around the circle pit before I was knocked up side the head by two size ten Doc Martens that adorned the skinhead who decided it was a good idea to stage dive feet first into the crowd.

I was dizzy, disoriented, and somewhat deflated by this. I stood on the sidelines for a few songs collecting my marbles and straightening my brain waves out. Once again the music took over my soul and I was right back in the action moshing and slamming away. I never left that pit for the rest of the show, and as battered and as bruised as I was, the adrenaline flowing through my body easily masked any signs or feelings of pain, which were unnoticeable until the following morning, but in the heat of the moment I was a bulletproof tiger.

Being in that pit gave me a wave of feelings and emotions. Even though we were all in there banging it out with fists and feet a flying, there was definitely a sense of unity amongst everyone. If somebody fell and hit the floor, there were a dozen hands out reached to help pick them up. Each individual was their own ball of energy, but we were all combined as one to create a huge electrical charge in the room. I felt completely un judged, I felt like I was apart of something special, i felt like the tribes of the moon embraced me, and most importantly I felt a sense of belonging. I was finally home...
Posted by Kabal at 12:34