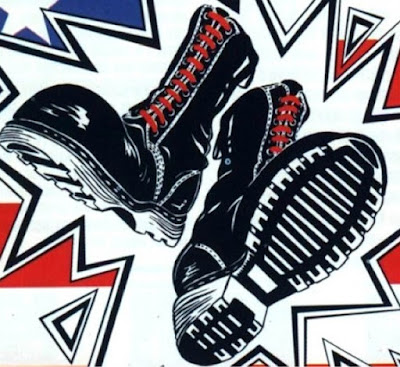 Another new trend I was seeing in the late 80s was "Rolling" Rolling consisted of taking articles of clothing from a person using either verbal threats or actual brute force. Rolling was predominant amongst the skinhead community, and they were usually rolling people for Doc Marten shoes or boots and bomber jackets, both of which are a staple of the skinhead uniform. It was as if the skins felt that only THEY had the right to wear these items, but we all know that this is a free country and we all have the choice of freedom to wear what we want and dress how we want.

The main targets seemed to be non skinhead people who were wearing these items, most of whom were mods or poseur punks. For awhile there it seemed like any given night that I went to the mall someone was getting rolled. This trend was happening a lot down in Toronto, which I guess was the factor that convinced Jerry's dad that we would be "killed by skinheads" if we went downtown Toronto.

The same thing was happening in Toronto amongst the black community, well it was more so black guys "rolling" white b-boys for gold chains, fancy track suits, running shoes, and even baseball caps. I never had an issue with either skins or blacks trying to roll me, but I did have a few friends that were "rolled" and I can't remember how many times I saw jacket less or shoes less kids walking around Bramalea City Centre. I was however fortunate enough to receive a nice pair of 10 hole paten leather docs that my best friend Julie rolled some younger pretty boy punk for.

As the crossover movement flourished and we found a sense of unity amongst the hardcore scene, rolling slowly started to die out, until "Maggot" showed up on the scene. Maggot was a female skinhead or "Chelsea" as we called them. Rumour had it she had been released from prison. Her real name was Margaret, or Maggie as she preferred to be called, but she quickly earned the nickname "Maggot" because of how low down and dirty she was.

Maggot was covered in mediocre manly tattoos which just added to her un feminine appearance, and she was already lacking in the "looks department" to begin with. Just as we were all finding peace and unity amongst the scene, Maggot showed up out of nowhere and started turning things upside down. She started rolling anyone and everyone that weren't skinheads but wore docs & bombers. She was so ruthless and intimidating that even younger males were giving the goods up to her. This would continue on until a hero finally stepped up to the plate to give Maggot her "just desserts"...
Posted by Kabal at 13:03