It Takes A Nation Of Millions...

When I got home from school I was once again a man on a mission. I went straight to my bedroom, dug up a blank cassette tape, and popped it into my dual cassette player. I put the Public Enemy tape in the second cassette slot and hit play/record to commence the dubbing. Instead of listening to the tape right then and there, I decided to do some other stuff around the house. My tape deck would automatically switch sides when one side completed, so I kept myself busy for 90 minutes until I knew both sides of the tape were completed. It was now time to give this thing a serious listen from start to finish...and then some. 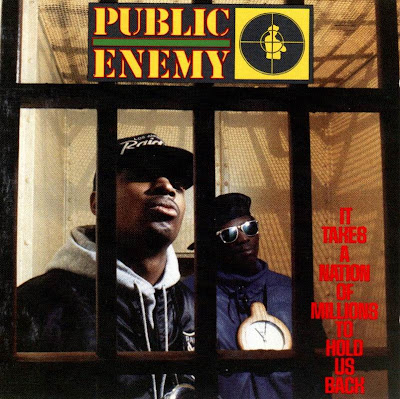 The album title was "It takes a nation of millions to hold us back" and I found it very fitting since this was such a powerful recording. On their first album Public Enemy resembled any other rap group, having a drum machine, minimal samples, scratching, and rapping...mostly tales of urban street life straight from Long Island New York. Now on this new beast of a release they had upped their game in a major way. The music was much more interesting, boasting tons of samples and faster tempo beats in comparison to their first album. The DJ work was easily some of the best I had heard to date, and the lyrical content had become so political that I actually thought the government would try to extinguish them before they caused an uproar of protests and riots and hostile takeovers from the black community. THAT is how powerful, controversial, and profound I felt it and found it to be.

Public Enemy also seemed to have a new found attitude and aura about them. To me the first album sounded somewhat lazy and generic as far as rap music went, but now they were seething with anger, aggression, rage, hatred, and energy, all within the confines of positivity, but in the same vein as hardcore music it made me want to uprise and destroy shit! This record was magical and that day it became my new favourite rap album which to this day still stands in my all time top 5 greatest rap albums.

At the time I didn't know it, but because the tape I dubbed was a dub, I didn't know which side was which and that led to me labelling side one as side two and side two as side one. I was unknowingly listening to the album in the wrong sequential track order which normally would have been a big issue with me since I've always felt records are created to be played from start to finish just like a book or a movie would. I could never understand why people went out and spent hard earned money to buy a shitty record from some shitty band just so they could listen to the one hit song it contained repeatedly.

I read a few weeks ago on Wikipedia while doing some research on this album that it was originally designed to be played the way I was listening to it but for some reason I cannot currently recall the group decided to switch the sides up at the last minute. I always regarded this album as a masterpiece, even years before I officially bought it to discover I had the sides mixed up, and in my mind that just proves how classic it is. You can listen to either side first and it still translates as a great musical journey which stands the test of time in any rap fanatics books.

You can only imagine how stoked I was when I discovered there was a video for one of the songs from the album shortly after...
Posted by Kabal at 13:27