After discovering the new Public Enemy album via my friend Jeff, I was eager to ask Wayne if he had heard it. In case you've forgotten Wayne, he was one of the few white b-boys in my high school who was once a metal head. The same guy who gave me the Mercyful Fate record I never got to listen to because the older guys melted it with a welding torch.

I asked Wayne if he had heard the new P.E. album and he had, just like myself it was his new favourite rap album. As we talked about the album I brought up the song "She watches channel zero" and went on about how amazing and heavy it was. Wayne agreed with me on that one and he even knew the name of the guitarist from Slayer who's riff had been sampled, his name was Kerry King. Wayne also knew the name of the song it was sampled from...Angel of Death.

I proclaimed that I needed to get my hands on a Slayer album. To my surprise Wayne mentioned that he owned a Slayer record that he was willing to part with for a mere five dollars. I told him it was a done deal and we made arrangements for the following day.
The next morning I wrangled up a five spot and eagerly headed to school. Wayne and I only had gym class together which meant we wouldn't see each other until 11am. It was a long morning of anticipation.

When the time came we met up and sealed the deal. I was super stoked that I now owned my first Slayer album. I decided not to show it to the older metal guys in fear of them sabotaging my sweet vinyl again, so I tucked it safely in my locker for the remainder of the day. When the bell rang I rushed home to partake in my usual listening ritual. 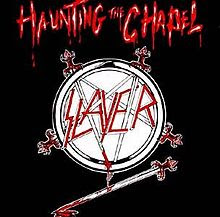 The record was called "Haunting The Chapel" and it was a four song e.p. The cover art was nothing fancy, just the circular Slayer logo and the album title dripping in blood. When I threw it on my ears were subjected to the heaviest sound I had heard to date. I was quite shocked by the blatant anti religious banter within the lyrics. These guys were evil and felt no need to hide it or sugar coat it. I wondered if God himself was going to cast me out and strike me down for listening to this record, but by the end of it I was still in tact.

All in all I really enjoyed the album but I was a bit disappointed that the riff Public Enemy sampled was not on this album. I now had yet another new mission to accomplish....find the record that contained "Angel of Death"
Posted by Kabal at 03:43