So getting back to christmas 83' (finally) I was ready and hyped and amped to see what record my cousin Jamie had gotten for me this year. My cuz had already turned me onto some awesome bands and I couldn't help but wonder what the next one was to be!

I unwrapped the album and to my surprise it wasn't a new band at all! It was another record from a band I already knew and loved......Black Sabbath! This was a recording of a live concert however and was my very first double lp! Yes there were TWO records inside the sleeve, which was adorned with various characters from Sabbath songs (the war pig, the neon knight, etc)all standing on what appeared to be a desolate beach and shore line. It was called "live evil" and I learned my very first palindrome! 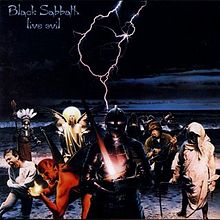 Unlike my last Sabbath record, this one did not have Ozzy Osbourne singing. The vocal duties had been picked up by a very small man with a very big voice named Ronnie James Dio. Dio had a completely different voice and style compared to Ozzy, but it still worked great with the music. Nothing against Ozzy I live him to death and all, but in reality Dio was a better singer with more range.

Not long after I was at the chinguacousy library where I used to frequently rent records and books from, when I discovered something that took me by surprise! Dio had an album with his own new band entitled "holy diver" I checked it out from the bibliotheca immediately! It was pretty heavy, very fantasy oriented, and contained some kick ass songs! Once again my cousin had (inadvertently) introduced me to a new band!
Posted by Kabal at 03:21