In 1984 when breakin' was blowing up there was another very important film that I neglected to mention, yet it deserves much credit as it is a very fundamental element to the hip hop culture and to my existence. The movie was called "Beat Street" and it focused on the breakdancing and graffiti scene in New York City. The soundtrack was composed by the first rap group I ever heard, Grandmaster Flash & The Furious Five. 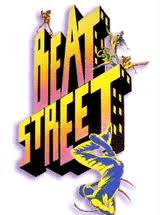 Early into grade 6 there was a notice posted announcing a breakdancing display that would be performed in front of the school. They were encouraging students to come and sign up for it after school. When the bell rang that day I scurried off to apply. My jaw dropped when I discovered 50 to 100 kids waiting in line. I took a bus home daily and there was no way I was going to wait in this line and then have to walk over an hour to get home when the try outs were said and done.

When the day came, every student in the school was assembled in the gymnasium to witness this breakdancing spectacle. A lot of the breakers were decent and some of them were just plain wack! In grade 5, I was one of the best breakers in my school. I could moonwalk, pop & lock, do various waves and the worm, the turtle freeze and the crab walk were also specialties of mine. I even had a decent backspin and my knee spin was untouchable.

Compared to some of the kids on stage that day my skills paled in comparison. One of the students even pulled off a head spin which I had never seen in real life, only in movies. Another Asian boy from my grade pulled of the deadliest backspin I had ever witnessed, he spun with extreme quickness and I lost count of his rotations somewhere after 10.

My ego was a bit deflated to say the least but I still knew in my heart I had just as much skill if not more than some of the performers that day. In a way I was somewhat discouraged to continue breakin' after that day. The trend was starting to slow down and the fashion aspect of it was changing drastically. I am also that guy who discovers new cool things before everyone else, but once they becomes popular I lose interest as it doesn't make me unique or an individual anymore. The flavor of the year was staring to lose taste and I was left with a quench and desire for something new to inspire me...