The more i write about 1984 the more I seem to remember, it was an important year for me indeed. There was also another new musical genre that I discovered through my sister Christine and it was called "Punk".
It definitely wasn't hardcore by any means but was a good introduction to the music none the less. My sister didn't have many punk records but the 3 she did own would be my introduction to the world of punk rock, The Clash, Adam Ant & The Monks. 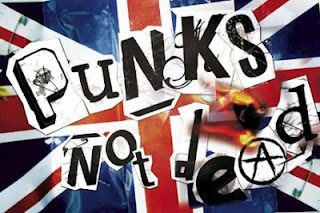 G.I.Joe was getting very mainstream at the time and all the boys were on the army tip. The look was somewhat similar to the punk style, so I too was soon decked out in army pants and camouflage t-shirts.  Another defining punk quality was the hair style. Spikes, mohawks and shaved heads seemed to be the most popular choices. Since my parents would never let me do anything extreme with my hair I settled for the "buzz cut" which ironically was the complete opposite of the locks I had been longing for throughout grade school.

Ear piercing and nose piercing was quite popular amongst punkers as well and that was something I hadn't really seen in the heavy metal scene.... and by god I wanted my ear pierced! Once again my parents flat out refused me and the next day I was in the school washroom trying to push one of my mothers dull stud earings through my earlobe... to no avail.

Musically it was an epic year for me. Discovering punk and rap on top of all the continuous rock and metal that was coming out. When I went into grade 6, I still had a shaved head with the new addition of a "rat tail", yet another new trend amongst youngsters. Essentially kids would leave a small patch of hair at the back of their heads and grow it long like a tail while still having trendy or conservative hair cuts, but the way I saw it, I was one baby step closer to growing my hair long...
Posted by Kabal at 03:22