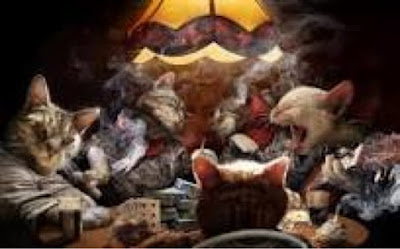 Fall had arrived quick as per usual, and with it came multi coloured leaves scattered about and the type of weather I'm most fond of. There hadn't been too many memorable parties yet this school year, until I caught wind of one. The guy who was responsible for the infamous cat shit party was having a second party. Although I didn't like the guy, there was no way I was going to miss this!

The strange part was, I didn't talk to the kid, I didn't like him and he didn't like me, yet he approached me none the less and asked if we'd be interested in playing his party. But of course we would! Even though we were minus a bass player now, we were still all pumped up and ready to trash out.

When the big day arrived we showed up to the party quite early with our gear, and surprisingly there were already a lot of people there. The scent of cat shit was in the air and furry felines roamed the premises. Shannon came with us as well as our usual entourage of friends. For a guy who had supposedly quit smoking weed, I managed to puff a shit load behind her back over the course of the evening. Any chance I got, I'd make my way out to the garage and blaze up with whomever was in there at the time.

The owner of the house came up to me and informed me his band would be opening since they were a cover band, and Social Disorder would headline. Sounded like a fair deal to me. His band finally started playing around nine o'clock pm, and I was somewhat dumbfounded by the fact that they didn't even have a vocalist! They were a 3 piece act consisting of a drummer, bassist and guitarist. Claiming to be a cover band was one thing, but these guys didn't even have a singer! All they played were half assed renditions of Metallica songs, some not even in their entirety due to the fact these guys didn't have the chops to play such talented, intricate music.

It felt like they played forever, and when I finally checked the time it had been well over an hour since they started playing. Eventually they ran out of songs, so they resorted to playing the same songs all over again. Fed up by this point, I approached them and asked when we were going to get to play. "One more song" I was told. They played one song, and another, and another..... songs we had already heard them attempt to play multiple times. Eventually the crowd got wise to what was happening, and they all started booing and telling the band to pack it in, thank god!

It was finally our time to play, we set the gear up as fast as possible and started off with a cover of our own, "the bag lady song" by The Accused. I was higher than a kite, three sheets to the wind, and an intense ball of energy, giving my best delivery and performance to date. When the song ended the crowd went crazy, personally I think they were just relieved to hear some vocals finally, and a song that wasn't written by Metallica.

Next we busted into "Will-Nots" one of our more solid tracks, at least in my mind. Halfway through the song I happened to notice two old people come downstairs and start watching us. Once we finished the song, cat shit kid came up to me and informed me his parents were now home and we'd have to pack it up. "Are you fucking kidding me? We got to play two songs!" I proclaimed. We had been bamboozled. I was almost certain that his band kept dragging things on because he knew his parents were coming home, so they stalled things out hoping we wouldn't have the chance to perform. It was as if he had us jump through hoops and cart all of our gear around, just for his amusement.
A sick personal joke if you will.

I was absolutely stoked however by the amount of people who approached us afterwards to give us props, that was a great feeling. Although we only did two songs a lot of people got to see us and hear us, and looking back this would be our best live show we ever did. I just had absolutely no clue at the time that it would be our last show...
Posted by Kabal at 12:22