Apologies as I am a day late with this post, I've been doing fairly well with keeping on top of the new schedule thus far, but as we all know, we can't always control our lives on a daily basis.
Today however, I am taking a break from the story to bring you up to speed on current events regarding my latest effort "What's below remains below"

For a project that literally just started this year, I've already knocked quite a lot of it out so far. I've completed seven or eight songs now, and I have at least 10 more in the workings. As per usual I've been taking notes anywhere and everywhere so that ideas are never lost and I am able to truly bring my newest vision to life.

This week alone I managed to hammer out two tracks. The first is the intro to the album, it also serves as the title track. You can hear it by following this link:

The second track is actually a reprise of "hate rap" the first rap I ever wrote back in 1988. I used an amalgamation of the same instrumentals I originally did the rap over, but they are arranged much differently than the original version, which was just a DJ friend of mine beat mixing records. Of all the lyrics I've written over the past 25 years, the lyrics to this song are virtually the only ones I don't have on paper somewhere.

I did remember my opening line to the song, which was enough to get me started. Once the ink began to flow from my pen and the music played repeatedly, it enabled me to unlock some more ancient lyrical script from the vault in my mind. I ended up having to take liberties with some of the lyrics, but it definitely captures the essence of what I was hating on back when I originally wrote it.

When everything was said and done I ended up with a song that was 36 tracks in total, yet just over 2 minutes long. Amazing how 7 hours of hard work results in two minutes of musical bliss. The lyrics are somewhat controversial, and they may even be offensive to some. I would just like to state that this is a reprise of thoughts and beliefs I had as a teenager, and it doesn't necessarily reflect the views and opinions I have in this present day....or does it?

With that said, get your hate on haters! 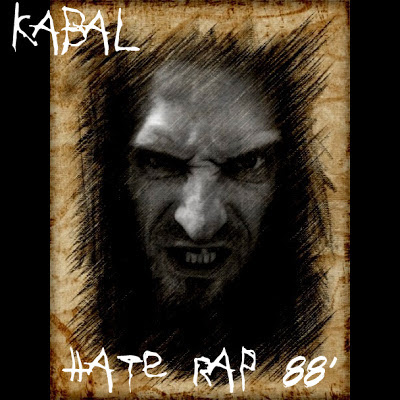