Well the big day had finally arrived and I was now officially a high school graduate. I ended up not attending the graduation ceremonies, as I had no interest in doing so. I did however decide to attend the after party. I was actually in Toronto that day hanging out with Derek at the shop. Once he closed up, I made my way to the hotel, which was over by Nathan Phillips Square. It ended up being a pretty uneventful night, with the exception of a bunch of jock douchebags who were trying to live up to the chaos my friends and I had created at the Aquinas grad. All in all it wasn't that memorable, I had a much better time crashing other schools grads.
So now I was in the real world. My mother was already on my case about finding a job, and she even took the liberty of applying to job agencies for me. In my mind I had no intention of finding a job, hell I had just worked a job for the last 13 years....it was called school. After spending a semester in the animation studio, I found it a bit boring and tedious. I knew deep down this wasn't what I wanted to do with my life, so I decided not to spend my parents money on college.
I was quite happy working for Derek and doing the band thing. D couldn't pay me much, but he made up for it with lots of free schwag and fancy dinners at trendy downtown restaurants. I didn't have a clue what I wanted to do with myself, but I was enjoying the place I was in. Back in Brampton however, my close friends were becoming rather perturbed with me, as I was spending most of my time in Toronto now. We decided to get together and go out on the town.
When that day came, we went to Backtrax, as it was still the only cool hangout spot in Brampton for punks and like minded people. We met up for some underage drinking, dancing, and videogames. Yes, the bar had a few coin operated arcade machines on site, so naturally that is where the beer gravitated me towards. I was playing one of these games when I first saw her. She was a fit, shapely goth girl with mysterious dark eyes and skin as white as a porcelain china doll. She was decked out in all black, including her makeup and very short, shaved hair. We made eye contact with each other and smiled. This flirting continued on until I finally mustered up the bravery to go talk to her.
I made my move and we hit it off well. Her name was Sue, the same name as my mother. I figured this could be a blessing or perhaps not, but knowing what an angel my mother is, I decided to take a chance on Sue. We started talking on the phone the next day, and by the weeks end we were officially dating. Life seemed to be dealing me a good hand. My band was on the up and up and I graduated with colours that weren't necessarily "flying". I had no luck with girls throughout most of high school as I never applied myself, but now here I was just a week after graduating, and I'm handed this beautiful young woman. Life in the real world didn't seem so bad after all... 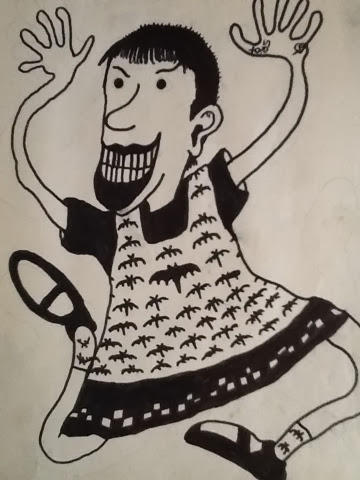