Just as I told everyone I'm trying to shy away from too many "general update" blog posts, here I am yet again with my foot in my mouth, as its time once again for some new current updates.

This time however, I'm stepping aside from music for a change, to inform you of my latest non musical venture. My friend and former co-worker Jon and I were always having hilarious discussions about old arcade video game machines, and our conversational chemistry was so natural, we would be red faced from laughing, eyes tearing up, and highly excitable...all from a simple video game convo. After a few hangouts where the same pattern re-occurred, Jon suggested we should start a podcast radio show. Being the type of guy that I am, constantly relying on my creative outlets to maintain my sanity, I instantly agreed on his brilliant idea.

We shot some ideas around, mentioned it a few times, but nothing ever really came of it. Jon lived right across the street from me too so why were we slacking so much? Ironically he moved to Guelph at the end of the summer, and NOW we finally decided to actually do this damn thing! So last Tuesday, Jon showed up at my place with some energy drinks & party favours, and it was time to roll tape.

I had previously planned to set my living room table up as a make shift radio station, with various microphones and a mixer, unfortunately I realized at the zero hour that I was missing a few key elements to pull off my planned setup I had in mind. So we ended up simply sitting a microphone in the middle of the table to do our thing. An hour later we were finished an we both felt pretty good about it, it felt natural, nothing felt forced, and surprisingly we spent 45 minutes talking about the classic 1983 arcade game "Dragon's Lair"

Later that day I did a bit of editing and processing of the recordings, which I wasn't super thrilled about. There was a substantial amount of noticeable air and hiss in the background, caused from the two of us sharing one mic that we were both sitting a fairly far distance from. I'm so picky when it comes to production but there wasn't much I could do by that point, but live and learn, move on, and retain that new knowledge for the next recording. I also made us a theme song that day, finalized all the editing, and launched a website for our new podcast, which we decided to call "The Coin-Op Podcast" since we are strictly talking about coin operated machines.

We're both pretty stoked about the whole endeavour, and we've already received some decent feedback from people. The show is going to be bi-weekly for now, so you can expect episode two sometime next week if things go as planned, however it might end up being a monthly show, we haven't quite decided yet. Never the less if you've got 45 minutes to kill listening to two bad dudes talk about Dragon's Lair, click the link below, and be sure to like & share on Facebook! Peace out! 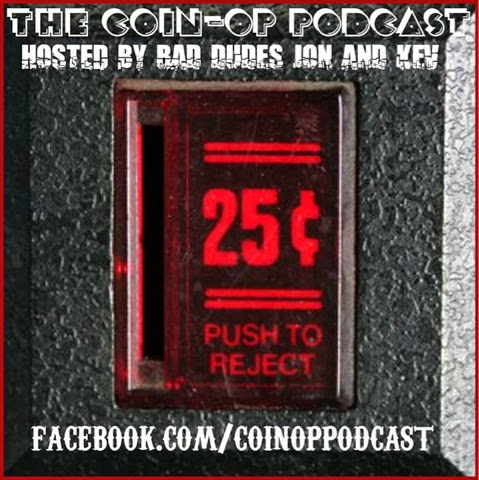