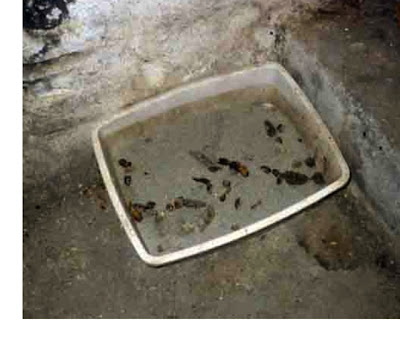 In my grade 10 English class there was a small group of guys who we referred to as "the skids" they were your typical dirty rock on types who thought they were cooler than anyone, yet they were too stuck in the 80s metal time warp to understand the nuances of hardcore kids such as myself. Word had it these guys had a "band" but no one ever saw nor heard shit from them.

I caught wind that they were having a party at one of their houses on the weekend, and surprisingly E.B.S. was going to be performing. For some reason we didn't make it to the party, I can't remember why but it ended up being one of the only EBS shows I ever missed.

On Monday all the EBS guys were referring to the weekends gig as "the cat shit party" when I inquired why they had dubbed it such I was informed about how the dudes house was full of cats, there were litter boxes and turds everywhere, and apparently the entire house smelled of catshit. Hilarious I thought to myself.

Later that day in English class, I overheard the kid who lived in the "catshit house" bad mouthing EBS and their performance from the weekend. The guy referred to them as "Epileptic Butt Fuckers" and I was fucking furious! When I told the EBS guys about it they just kind of laughed it off. I guess that kind of thing didn't bother them...or so I thought.

The next weekend while out drinking and roaming the streets, the EBS boys ran into "the skids" Mike Myre, who was extremely intoxicated, started calling out the catshit kid about his comments. Before the shook kid could say a word Myre was pummelling him into the ground repeatedly yelling "Epileptic Butt Fuckers huh?!?" For the finish, he picked the dudes bike up and dumped it on top of his battered carcass lying in the street.

The guy never even showed up to school the following week, I think he was embarrassed and wanted to hide his wounds until they healed. EBS were very peaceful, nice guys, and generally straight edge, but if you threw some booze in the mix it was quite apparent that even the nicest of people could get medieval on somebody, and I was loving it!
Posted by Kabal at 12:32