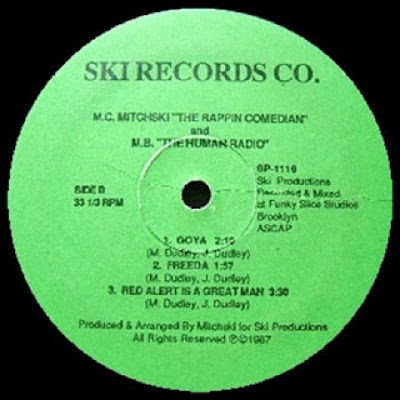 Greetings to my readers, I hope you all had a great weekend. I am posting today to bring everyone up to speed once again on current events involving myself. I would like to apologize first and foremost for the lack of blog entries over the last two weeks. Between Easter, my two jobs, parenting, and my music, I haven't had much free time. I did manage to make it to the Bad Religion concert last Sunday. I hadn't seen BR since 1992 or so, yet they still ripped shit up properly over 20 years later. Kudos to the old guys! It was great running into a few old friends there as well whom I hadn't seen in ages.

I have been focusing on working on new music over the past two weeks however, so I don't feel so bad neglecting my blog since I've been productive creating new songs. My best friend Jerry was over the other week and he brought up a song I had long forgotten about that we used to listen to back in 1987. The song was called "Freeda" by MC Mitchski "the rapping comedian" and M.B. "the human radio" In the days when Two Live Crew was the only source for "sex rhymes", Mitchski & M.B. delivered them just as comical and just as dirty. After scouring the Internet for a good hour we were able to locate the song, rip it to mp3, then we laughed and reminisced as we listened to it. Much to my surprise Jerry, who doesn't really listen to much rap, actually remembered more of the lyrics than I did! I was quite impressed.

After he left for the night I felt very inspired so I decided to re-make this classic underground track. After a few hours of hard work I had completed my cover song and decided to add it to my latest effort "What's below remains below" You can listen to the song by clicking the link below, I hope you dig it! Heavy Ghetto will return tomorrow, picking up once again where my story left off...

http://kabal.bandcamp.com/track/freeda-cover-song
Posted by Kabal at 18:24