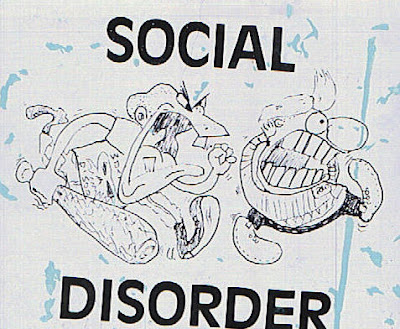 It seemed like all the awesome crossover bands had some form of mascot, and I figured we'd better get one too. Anthrax had the Not Man, D.R.I. had the skanking stick figure, The Accused had Martha Splatterhead, The Misfits had the Crimson Ghost....I mean I could just go on and on here. Before I even got to figure something out, Jerry came up to me excitedly, informing me that he could get stickers printed for us but we would need a design a.s.a.p!

When I got home that night I scoured the pages of my new found favourite comic "Neat Stuff" released by Fantagraphic Publishing. I had become a huge fan of this new wave of art that was introduced to me by my great friend Jay Poole. I ended up finding a picture of one character known as "Girly-Girl", she was chasing her buddy "Chucky Boy" with some form of weapon. I decided to borrow this image and alter it, the end result being a skin head punk chasing after a polo clad preppie with a nailed bat.

By the time I finally had the drawing complete I was ready for bed when I realized I hadn't even put the band name on the design. Pressed for time and longing for sleep, I busted out some transferable letters, you simply lined the desired letter up on your design, scratched over it with a pen and voila! Instant font.

I can't remember if Jerry printed the stickers at school or if his mom did it at her work, never the less we now had stickers, just like our idols EBS and Mold did. The time had come to deface anything and everything eirh the hopes of getting our band name out there. However we still didn't have a mascot...
Posted by Kabal at 12:35