The Re-Birth of Thrash

I called Georgina the next day, and we started hanging out on a regular basis. She was a very cool, laid back, down to earth person, and she knew quite a few people from my circle of friends. She enjoyed being introduced to new music, which was a specialty of mine, so needless to say we hit it off. One day we were hanging out listening to the newest Slayer album "Seasons in the Abyss" when I made the realization that the record was now two years old and there hadn't really been much new thrash music to hit the scene. I had gotten so involved with hip hop music that I had lost touch with my roots to a certain degree. Derek was also introducing me to new music all the time as well. Perhaps the combination of the two had set me off course. But even when I flipped through the pages of M.E.A.T., Now, Eye, Maximum Rock and Roll, etc. I wasn't seeing any of the bands I was familiar with. Groups like Soundgarden, Nirvana, and Pearl Jam were getting all of the coverage. It seemed like Grunge was in and thrash was out. These were dark days for metal.
Then one day George came over and she decided to return the favour of musical introduction. She had brought a Cro-Mags cd with her, a band I was familiar with. I did not however own any of their material, so I was more than happy to dub the cd to cassette. George also brought a second cd with her that had just been released a few months back. It was called "Vulgar Display of Power" from a new band on the scene called Pantera. I popped the disc in the CD player and sat back to listen. Right from the get go I was captivated. The music was heavy, the production was great, and the song writing was brilliant. In a time when it seemed like Thrash was about to die, Pantera had breathed new life into the genre. I felt fortunate that George had opened my eyes to this band, and of course I copied the cd to tape. It would now receive endless plays in my boom box and my Walkman. I vowed to fly the thrash flag with pride, and I would strive to keep my eyes and ears to the ground so I would never lose touch with the music most important to me. 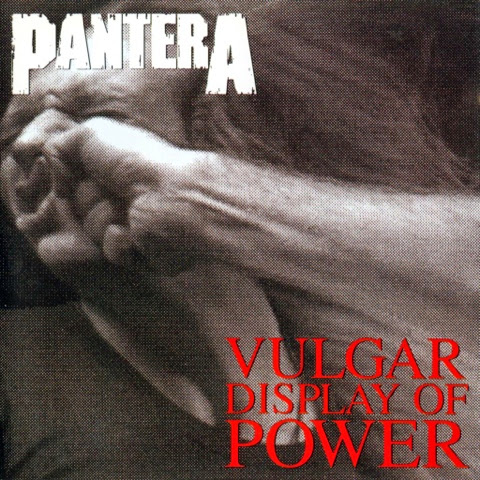 I was really starting to develop feelings for George. I was rarely in Brampton, but when I was I'd spend most of my time with her. One day I finally built up the courage to tell her how I felt about her. Much to my surprise, she didn't harbour the same feelings. She considered me a good friend and nothing more. I was baffled. I couldn't figure out why a girl would kiss me, give me her number, spend all of her time with me, and then just want to be friends. I was hurt, confused, and conflicted. Being a young man, it's hard to just be friends with a girl you have strong feelings for. It became harder and harder for me to hang out with George, so I slowly started distancing myself from her, focusing more on the band and rekindling friendships with my Brampton boys.
Grasshopper was still blowing up. We were getting more gigs and we were still playing shows regularly at the 1150. It seemed like every time William New booked an up and coming band he would give us an opening slot. This was quite exciting to us, as we were making new friends and new connections in the industry. Our songs were starting to get a bit more refined and we were writing new material. We planned on going into the studio with Dummy for June, but that was still months away. So we decided to make a new demo tape. I had been playing around with Derek's four track recorder over the last year, so I took on the production duties.
We set the gear up in our jam space in Dawn's parents basement and we were ready to roll tape. We spent the day laying down tracks and I was quite surprised by the final outcome. The recording sounded just as good, if not better, than the Slow Poke demo Alvin had recorded for us. The three of us were quite happy with the finished product, and we now had a newer, updated demo tape to shop around.
We just had to come up with a cover concept for it...
Posted by Kabal at 07:44