It now had became a tradition to goto Tremors on the weekend with Paul, granted I wasn't doing gigs in the city. It was the same game every time too. Hang out by the back door area and drink peoples drinks while they use the bathroom. The great thing about this little club that could, was the fact that more and more people were catching on to it, in turn causing a higher number of people to show up every weekend. Stationed beside Paul in my pseudo doorman position enabled me to meet a few ladies. I wasn't normally outspoken or outgoing with girls, but Paul sure was. That kid had charm. I suppose he was somewhat inspirational in that sense, plus add in all the free booze combined with that inspiration and you've got one outspoken, outgoing Kevin.

I made out pretty good for myself. After a mere month or two of going to Tremors on occasion, I now had three different girls on the go. The silly part is I met them all at the club at one time or another. They all went to the club every weekend, yet none of them knew about each other. Mainly because I always hung out at the back door with Paul as opposed to schmoozing around the club. The girls would be off drinking and dancing, completely unaware of each other's existence, and I'd only ever see them when they came to the back of the club to use the bathroom. I'd drop my lines, get a kiss, cop a feel, and then they would be on their way back to the dance floor. The odd time I'd go out the back door with one of them so we could fool around in their vehicle. I guess I thought I was pretty slick, I had officially become a player. But with every game you play there is always a price to pay.

Derek was going on a vacation with his girlfriend and her family, and he had some movie passes he wasn't going to be able to use. They were advanced screening tickets, meaning you would get to see the movie before it was officially released in theatres. The film was called "Singles" and it was a romantic/drama/comedy exploring the new found craze of Seattle and the grunge scene. Derek handed the tickets off to me since he wouldn't be able to go, and I graciously accepted them. Now I just needed a date. 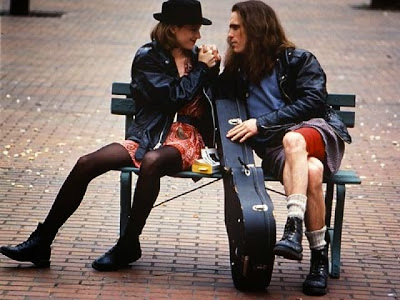 Out of the three girls I had been messing with, there was one in particular whom I found to be a cut above the rest. Embarrassingly, I can't even remember her name, but I asked her to goto the movie with me and she agreed. On the night of the screening she picked me up at home and we drove to Toronto. The film was packed with all kinds of trendy Toronto people who seemed to favour socializing over the fact they were watching a movie. The flick made absolutely no impression on me, and I found it to be quite boring. I was happy to be spending time with this girl though.

On the drive home we talked and really connected. When we got to my house I thanked her for the lovely night and exited the vehicle. She called me back over to her car and asked me why I didn't kiss her goodnight. I told her i wanted to, but I was trying to be a gentleman. She grabbed me, pulled me in, and kissed me deeply and passionately. I had never been kissed like that. She went on her way, and I went to bed, although I couldn't sleep as she was running through my head all night.

The weekend came and I was back at Tremors with Paul once again stationed in the usual location. A few hours and a few drinks later into the evening, somebody tapped me on the shoulder. I turned around to see all three girls I had been "dating" standing in a group together. They were all in sassy poses, arms crossed, hands on hips, etc. and they all had fire in their eyes and cocky smirks on their faces. I held my hands up like they were the police and exclaimed "YOU GOT ME!!!" They all started having a go at me verbally, but I was so drunk that I just laughed it off without shame. My first attempt at being a player had been stymied. I really didn't think much of it nor did it bother me, so I partied the rest of the night away.

When I awoke sober and hungover the following morning, I replayed the scenario of the previous night over and over in my head. At the time I didn't care, but now that I had somewhat of a clear mind, I realized exactly how badly I had fucked up. I really didn't care about the first two girls, or how my actions effected them, but I was really bummed about the "Singles girl". I had truly made a connection with her and I was definitely harbouring feelings for her. I tried calling her but she wouldn't take my calls. When I saw her at Tremors I attempted to talk to her and confess my feelings towards her, but she wouldn't even give me a chance to speak.

I had learned a life lesson the hard way. I had abused someone's trust, and later developed strong feelings for them, but by the time I realized, it was too late. As a young man I thought I had known love, but looking back I realized it had not been true love. Now I was feeling the real thing, but it was too late. I'd blown it, and there was no way I was going to get this girl back after leaving the taste of betrayal in her mouth. "Singles girl" had officially became my first true lost love...
Posted by Kabal at 08:56