Once again I apologize for being a day late on my blog post. I've been trying to keep up an every other day routine for the summer but it's tough sometimes with my busy life. Today's post will be regarding current events.

On Thursday, July 19th, I attended a one night only screening of "Nightbreed:The Cabal Cut" in Toronto at the TIFF bell lightbox theatre with my best friend Jerry and my old roommate and coworker Matt. For those of you who don't know, Nightbreed is a movie and novel by Clive Barker,the man most famous for bringing Hellraiser to life. Nightbreed has been one of my favorite movies since I first saw it at age 17, and it was also the inspiration behind my alias that I rap under "Kabal" 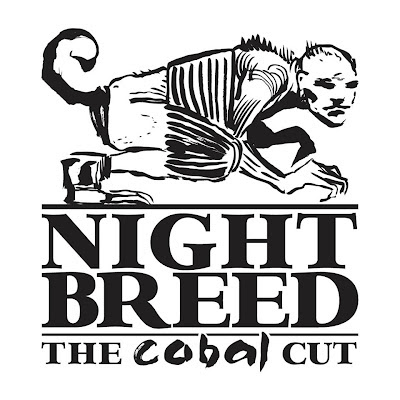 3 years ago some friends of Clive Barker discovered some old VHS tapes with tons of unused footage that ended up on the cutting room floor. The duo began restoring it as best as they could and edited the footage with the film that was released in theatres. Three years later the cabal cut was complete and they are now screening it around the world. I've been following this process for the last two years and was thrilled to finally get to view it.

The cabal cut is not Nightbreed. Morgan creek butchered the film adaptation of the novel which resulted in poor box office sales, but the film went on to reach cult status regardless. This new cut was true to the book and altered the story significantly. The film is now 55 minutes longer with more depth to the story, people dying who didn't die in the original, people surviving who died in the original, new unseen breed and a few other surprises. The new footage was pretty rough, it resembled a late 70s/early 80s VHS movie, but it didn't bother me one bit. I was on the edge of my seat the entire time and constantly excited to see what would happen next.

The men responsible for the cut are currently trying to raise money and awareness to properly restore the footage and release a DVD/blue ray for public purchase. There is a petition online which I encourage everyone to sign, and I've also posted links to a Facebook group for support of the film, and videos of the film's introduction and the Q&A session that took place after the film. I'd personally like to thank everyone responsible for making this happen as it has been a dream come true for this fan.