Birth of the B Boy

One day during grade 8 I was watching music videos on television, my trusty VCR remote in hand ready to capture anything that caught my attention. A video came on with 2 parents getting ready to go out for a night on the town, they were instructing their two sons not to get in any trouble. The two sons reminded me of "Louis" and "Gilbert" the two main characters from my favorite movie at the time "Revenge Of The Nerds" so I decided to hit record on the VCR. Little did I know I was about to be introduced to what would become my all time favorite band.

The two "nerds" decided to have a party. They declared they would invite all their friends and have punch and pie with the hopes that no bad people would show up. The guests arrived and the quiet, pop and chip party was suddenly interrupted by a loud guitar, accompanied by the front door breaking down. Three white guys walked in, looking like a cross between rappers and metal heads respectively. After them, a barrage of unruly guests entered the party. They ranged from punks to metal heads to b boys. 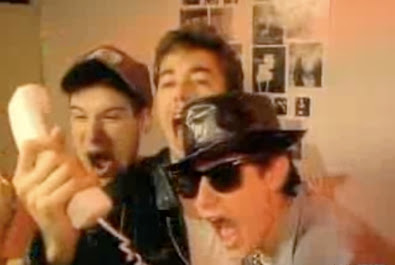 The song itself kicked in at the same time that the front door was, and it sounded like a pretty heavy rock song, until the singing started. It wasn't really singing persay, it was rapping, on a heavy beat with heavy guitars. My mind was instantly blown at this new crossover sound, but what blew my mind even more was the fact that three white boys were rapping. This was a huge change from the Grandmaster Flash, Kool Mo Dee, Fat Boys, and RUN D.M.C. that I was used to and knew as rap music. The video was quite comical, these 3 whiteys rapping away, making out with girls & completely trashing the house. The band was called "Beastie Boys" and the song title was "Fight For Your Right To Party" What a great song title I thought to myself, and an even greater band name, plus one of the best music videos I had seen to date!

At one point in the video, one of the "Beasties" who's name I'd later learn was "Mike D" pulled a huge bottle of Spanish fly out of his jacket and dumped it's contents into a punch bowl. Later on he encounters a rather large sized lady drinking the entire bowl, as soon as she spots Mike D she begins chasing him around. I had seen "Spanish fly" in several 80s movies prior to this and I was always trying to track some down to get my hands on, but now I was determined to track something else down to get my hands on...this Beastie Boys record!
Posted by Kabal at 03:38