As the school year of grade seven was winding down, it was once again time for the big week long school trip, which for the grade seven students would be a trip to Quebec. After being denied the grade six trip the previous year, I tried to keep on the straight and narrow path in grade seven. Realistically I was still getting in shit for the same old stuff, just not to the same extent as I was in grade 6.

I clearly remember being big on the AC/DC album "Highway To Hell" that year and it was the only cassettes I brought with me to listen to on my Walkman during the long bus ride, which was roughly 7-8 hours. When we finally arrived the first stop we made was at some novelty store before heading to our hotel. They told us we had 10 minutes or so to use the washroom and buy anything we liked.

The store was dark and dingy with all kinds of cool gags and weapons. I quickly grabbed an aerosol can of "fart spray" and a butterfly knife (as I was big into ninja movies) which ran me about 10 bucks. A few of my pals came up to me all giddy telling me I had to come see something! At the back of the store behind a beaded curtain there was an adult section containing pornography and toys. The guys were all laughing at a rubber dildo about the size of my arm. The creepy clerk took it out from the display case and asked "Do you like?" Needless to say we got the fuck out of there in a flash. 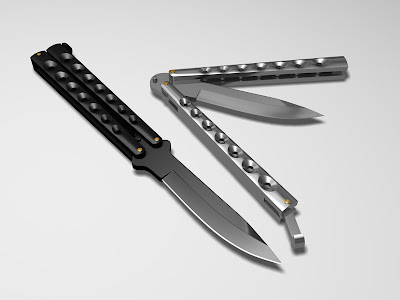 All my friends were into ninja movies at the time so naturally they all bought knives, throwing stars and other assorted weapons. When we exited the store I was shocked and appalled to see that two male gym teachers who had volunteered to chaperone on the trip, were examining the contents of our bags from the store we had just been in. Anyone who bought a weapon had it confiscated immediately and was told when we got back our parents would be contacted to see if we were allowed to posses said weapons. To me the whole thing felt like a scam, a big set up if you will. If this was any indication as to how this trip was going to play out we were in for a long, bumpy ride...
Posted by Kabal at 03:16