The spring of 93' saw the death of Grasshopper, but everything else was in bloom and coming to life. A new hiphop group had emerged on the Soul Assassins label which had been made famous by House of Pain and Cypress Hill. The newest addition to their family was a trio called "Funkdoobiest" consisting of DJ Ralph M The Mexican and rappers Tomahawk Funk and Son Doobie. 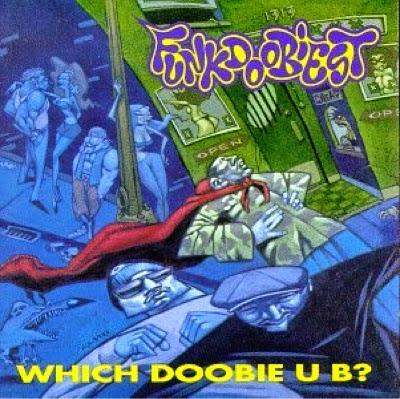 Their debut LP "Which Doobie U B?" was an instant classic in my opinion, with banging production from Ralph M as well as DJ Lethal from H.O.P. and DJ Muggs from Cypress, so naturally it had that same type of feel as both of those groups. Lyrically it was a bit different though. Son Doobie was the main rapper, with T-Funk as his back up and hype man. T had a lower deep voice and an interesting choppy rhyme flow, while Son was a bit more high end and nasal.

They released a music video for the title track "The Funkiest" and it was getting mad rotation on the video shows. It wasn't long before they dropped their second video "Bow Wow Wow" riding the momentum of their first hit. They were blowing up quick and I was loving it.


Meanwhile in Brampton, I was truly enjoying spending time with all my different circles of friends and catching up with everyone. I had really been a ghost in this town the past few years but it was nice to be embraced by my friends after being MIA for so long. I was spending quite a bit of time with the Demon Barf posse, as I'd mentioned a few posts ago, and it was always a blast hanging with those dudes. I had the privilege of getting to attend their studio sessions for the recording of their demo "More Sweat From The Cornhole" and I even got to make a cameo appearance as "Satan" partaking in a wrestling interview.

The DB boys were now slated to appear on Owen's cable 10 show "Fusion" to perform some of the songs from their new release. I was totally surprised and caught off guard when they approached me and told me they wanted to do a cover version of Public Enemy's "She Watch Channel Zero" with yours truly on vocals. They also wanted Mike C to bring his turntables along and join in on the action. We were all so stoked.

When the big day arrived I found myself in quite a bit of a predicament. It was Greek Orthodox Easter, and I was expected to goto my grandparents with my family. I had never missed any family gathering in my life, but now being a legal adult able to make my own decisions, I decided performing with Demon Barf was more important, much to the disappointment of my parents. I felt like I had let my family down, yet if I didn't goto the Fusion taping I knew in my heart I'd be letting all of my friends down. 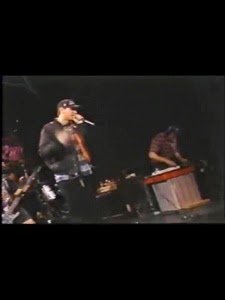 Still shot from the video of me and Mike C.
The performance went pretty awesome and the day was a success. The boys decided they were even going to include the song as a bonus track on their new release, which was highly flattering and exciting to myself. I truly felt a sense of camaraderie and brotherhood amongst the DB crew, they were all genuine people and the best friends a guy could ask for.

I had also started hanging around my old thrasher buddies quite often as well, mainly Shayne aka "Spicoli" as he lived a hop, skip and a jump from my parents house. We were partying it up every weekend at various people's homes, which was where I ended up getting acquainted with his friend Greg, a talented guitar player who was in a blues/jazz band called "Sweetgrass" I had met him a few times in passing, but we had never really gotten to know each other.

While partying at our buddy Gary's place, I specifically remember blaring the Public Enemy album "Fear of a black planet" which led to some pretty deep musical discussions between Greg and myself. Greg was looking to start a new musical side project called "Psycho Puffs" his vision was a hybrid of metal and rap, and he was interested in working with me. I was totally stoked on the idea, and the following morning I found myself so inspired that I managed to write three songs, hangover and all.

Shayne had also made some new friends over the past few years of me being AWOL, and I was slowly but surely meeting them all. He was now working as a stereo salesman at Majestic, which was a trip to me. This once flamboyant thrasher was now a "short hair" suit wearing electronics peddler, but on the inside he was still the same old Shayne. I started meeting a few of his salesman buddies over time, and by early May we were partying quite frequently with one of them named Michael. Mike was black but he was by far not your typical black man. The guy loved classic rock such as Pink Floyd and Joe Cocker just to name a few.

Michael seemed like a very happy guy. He was always sporting a big smile, he was always outspoken, and he had a deep booming laugh that was highly contagious. We hung out at his place quite a bit, and he hung out with us at Shayne's quite a bit as well. One night he decided to invite a few of us to a party his friend was having. We'd never met this friend, or anyone at the party for that matter, but Mike was simply bringing people together.

When we got there it wasn't quite what I had expected. I was used to big ragers full of people, but this was a fairly quiet and small get together. Being the shy natured person that I am, I sat my ass in a corner to drink and smoke in peace, constantly observing and analyzing the party goers. To be quite honest I wasn't really enjoying myself and I perceived a few of Mike's friends to be goofs and morons. Then I saw her...