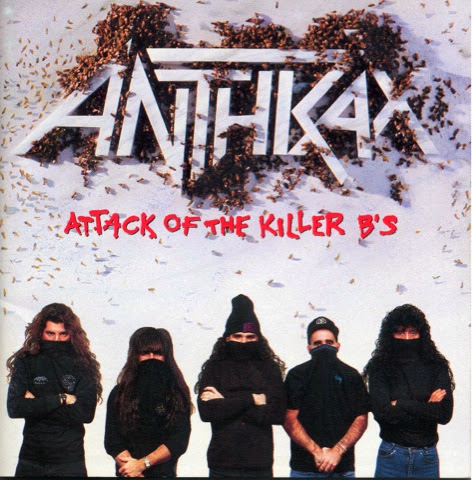 Before I jump feet first into the year 1992, there are a couple of important musical happenings I've overlooked from 1991. The first being in June of that year, the band Anthrax put out a new release entitled "Attack of the Killer B's" a collection of b sides, singles, and cover songs the band had recorded. There were some pretty cool gems on this record, and a few not so desirable songs, but there were two songs in particular that did it for me. The first was a 91' redux of "I'm The Man" the rap/metal song Anthrax did in 1987... The one song that essentially changed me as a person. The new version was done with actual drum machine beats instead of their singer Joey on drums. The vocals were all re done and they even added in some new extra lyrics. It was pretty exciting hearing a new version of such a beloved classic.

The second song in question really got me excited. It was a cover of Public Enemy's "Bring Tha Noise" and it was heavy! Guitarist Scott Ian did the rapping for the last two verses and Chuck D from P.E. did the first two verses. This song was absolute perfection to me. The proper mixture of rap and metal brought together in harmony. They even ended up putting out a music video for the song, which I watched countless times. It always pumped me up and had me wanting to throw down in the mosh pit.


The second happening didn't seem like that big of a deal at the time, to me it was just another concert. But now looking back, I realize exactly how fortunate I was to have been in attendance. Derek, much like myself, had a knack for discovering new unheard bands before the mass media and public got their hands all over them. He was the first guy who introduced me to grunge music before the scene blew up, and he had also introduced me to all these new bands I had never heard of such as Steel Pole Bathtub, The Melvins, MudHoney, Temple of the Dog and Nirvana, just to name a few.

Nirvana however, was the band Derek liked the most. He played me their first album "Bleach" and I absolutely loved it. I quickly showed it to my friends, and my buddy James and I concluded they were kind of like a Motörhead Jr. Derek told me of how the first time they played Toronto only 7-20 people showed up. That's how low key they were at the time. Now he had informed me they were coming to play Toronto in September, so naturally we went out and got tickets. The Melvin's would be the opening act and the show would take place at The Opera House. 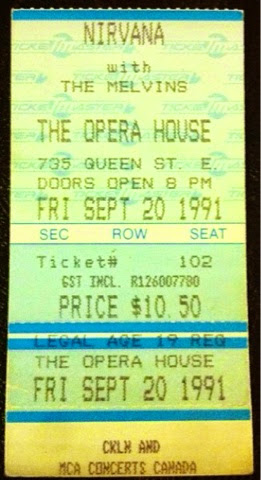 The day of the show I actually had a rehearsal for my Uncle's wedding that I was to be a groomsmen in. It was in Toronto, so as soon as things wrapped up, I hopped on the subway and was off to meet D. We headed to the show and found a comfy spot in the upper balcony area to watch The Melvins. I was somewhat familiar with their music, but on this particular night nothing was recognizable to me. For their entire set it felt like they would hit a note, let it ring on for as long as possible, then repeat the process. It seemed as if the whole performance was just droning noise, but they actually played the entire Eggnog EP. I dug it.

Nirvana finally hit the stage, so D and I hit the floor, positioning ourselves to the right of the stage in front of the speaker stacks.  We had acquired a demo sometime back of their newest album "Nevermind" which had just hit stores, so we were more than familiar with all of the material they played. As we rocked out in the pit things were getting congested and uncomfortable, so Derek started head banging wildly, his chunky dreadlocks smacking  people in the face, causing them to back out of our personal bubble. What a great guy to be at a concert with I thought to myself. Nirvana put on one hell of a performance, and we were right there the whole time giving them all of our energy.

At the end of their last song, their frontman Kurt Cobain dove onto the drums, causing the kit to dismantle. From there the band started trashing all of their gear. Kurt swung his guitar around, smashing it off speakers, the drums, and the stage. I had never seen a band do something like this with the exception of Pete Townshend from The Who, who was famous for smashing his guitar, which I had only ever seen on tv. It was wild to witness such carnage in person, and according to Derek they did this at the end of every gig. I couldn't figure out how an unknown band could afford to wreck their gear every time they performed.

I left the show that night in absolute awe and bliss. I chalked it up as another concert ticket stub to add to the collection in my wallet, but I had no idea exactly how special the night was. Nirvana's "Nevermind" would soon blow up, bringing the band into the spotlight of the media, creating stars of the Seattle Boys, one of whom would go on to take his own life and become an icon in the music world...
Posted by Kabal at 09:52