Things were looking very bright for Grasshopper. We were gigging multiple times per week, meeting and making new friends and connections, and most importantly we were making a name for ourselves within the music scene. I found it fascinating yet somewhat disgusting how certain club owners and promoters didn't have the time of day for us in the beginning, but as soon as we started making a little noise and garnishing some attention, those same people were ringing our phones looking to book gigs for us or help us out in one form or another. Even MCA bigwig Elliot Leftko, the same guy who tossed our demo tape into a sea of cassettes after 30 seconds of listening, was now bending over backwards to book us opening slots for bigger bands. When he wasn't doing that he was constantly filling our hands with merchandise from the trunk of his car or hooking us up on guest lists for any and every MCA promoted concert. Some of these people we embraced, others we turned our backs on, as they had done to us when we desperately needed a helping hand.

My personal life was becoming a ball of chaos that was hard to control. When I wasn't in the city, which was most of the time, I was constantly trying to juggle my various circles of friends and make time for all of them, which wasn't easy. I hadn't seen much of Jerry and the old boys at all, or many of my older thrasher buddies for that matter. Jerry's brother had recently started renting a house and Jerry was living in the basement, so I started hanging out there mostly when I was in Brampton. If I wasn't at Jerry's then you would usually find me at Derek's, or hanging out with Mike and Mike working on our rap project 3 n' Pass.

Down in Toronto I had made some new friends too, mainly guys from other bands we had been playing with. The Satanatras had become my favorite Toronto band, and my favorite friends to hang out with, mainly their guitarist Dallas. The Satanatras were blowing up bigger than we were in the city and for good reason, this was a group of some seriously talented musicians who were bringing a new brand of punk rock to the table. They were gigging just as much if not more than we were, and they were getting a lot of press in the local papers. NOW magazine had just done a spotlight on them, and the guys dressed up like KISS for the photo shoot, as they had recently played a gig where they all dressed up like the members of KISS. I thought it was absolutely brilliant. 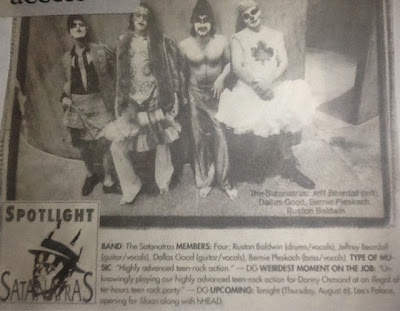 In my downtime I was now staying with Dallas a lot instead of actually returning home to shower and put fresh clothes on. It was quite typical for me to stay at his place for days on end. One day Dallas asked me if I'd like to help him paint the new place he had just moved into and of course I agreed. His girlfriend and some of her friends rented a house, and Dallas had just had to move out of his old place, so they let him stay in the basement. When he brought me down there for the first time I was a bit taken back to discover it was an old, musty, unfinished concrete hole in the ground. Dallas made it home regardless, decorating the place with flags and posters. He had picked up some blood red paint that he wanted to paint the ceiling with, which wasn't much higher than the tops of our heads. We got the rollers out, cracked the paint can, and got down to business.

By the time we were done, the two of us were flying high on paint fumes, to the point that I was actually mildly hallucinating. We sat down to relax for the rest of the day and Dallas introduced me to a band called "Angry Samoans" I was familiar with their name, as The Accused had covered their song "Lights Out" but this was actually my first time hearing them, and they were an enjoyable riot to listen to. Later in the day Dallas suggested we watch his favorite movie "Basket Case" again, I was aware of this film, I had seen it in the video stores countless times, but I had never actually seen the film. It was low budget, cheesy, and filled with terrible acting....and I absolutely loved it!

We got into some pretty deep talks as day turned to evening, and I learned that Dallas' father was a musician too. In fact his Dad and Uncle were apart of a fairly large music group known as The Good Brothers. Dallas told me all kinds of cool stories about them and how he got to go on tour with them to amazing places like Amsterdam. As we got deeper and deeper into our convos the telephone suddenly rang. Dallas answered it and had a brief, yet hectic convo with whoever was on the other end, then quickly hung up the phone. A look of panic and excitement instantly took over his facial expressions as he declared: "I TOTALLY FORGOT! WE ARE OPENING FOR WHITE ZOMBIE TONIGHT!!! I GOTTA GO!!!"

I stood there stunned for a minute, then I asked "Well what am I going to do now?" Without a second of thought Dallas responded to my question "You can be our roadie! Lets go..."
Posted by Kabal at 06:32